"Blessed" Alan de la Roche, O.P. (1428-1475) was a 15th Century friar who is considered to be the restorer of the Dominican Rosary. Although Alan has no official Church feast day, he is unofficially honored on September 8th, which is also the feast for the Nativity of Mary.

According to Dominican tradition, St. Dominic (1170-1221) founded the Rosary in 1208 as a meditative prayer which sought to spiritually combat the Albigensian heresy (which believed that only spiritual realities were good and vehemently opposed God taking flesh in Jesus Christ).  But this meditative Marian prayer featuring just the Angelic Salutation and the Evangelical Salutation  fell into disuse during the 14th Century during the era of the Black Death in Europe. 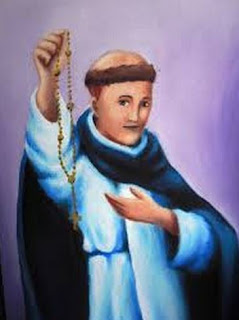 In the mid 15th Century in a Dominican monastery  in Brittany, Alan de la Roche experienced visions from the Blessed Virgin Mary and the Lord which eventually convicted him to revive and renew the Dominican Rosary.  De la Roche was not the perfect emissary for this divine mission.  At one point, Jesus appeared to De la Roche and said: "You have all of the learning and understand that you need to preach my mother's rosary, and you are not doing so. The world is full of devouring wolves, and you, unfaithful dog, know not how to bark."  The latter phrase was a pointed wake up call to a Dominican like Blessed Alan, as the Order of Preachers held the moniker "Dog of God" (Latin domini canus which sounds similar to Dominicanus)

Blessed Alan stressed the 15 mysteries of the Dominican Rosary, rather than the alternative of 50 clauses of the Carthusian Rosary.  Moreover, the 150 Hail Marys imitated the 150 psalms of the Old Testament, which harkened back to the proto-origins of the lay Marian psalter. Blessed Alan was successful at renewing popular devotion to the Rosary and reinvigorating the Confraternity of the Rosary. The Confraternity featured "after death" benefits for Rosarians. Thus Blessed Alan de la Roche may be considered one the greatest champions of the Rosary to ever live. 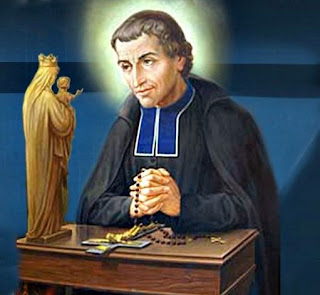 Although Blessed Alan wrote an instructional pamphlet Book and Ordinance regarding the renewal of the Dominican Rosary, about 1/3 of  the Vatican documents were lost after Napoleon sacked the Vatican archives from 1810-1813.  So much of quotable material about Blessed Alan comes from St. Louis de Montfort (1673-1716) whose 18th Century works True Devotions to the Blessed Virgin and The Secret of the Rosary were buried in a field in France for over 125 years, thereby escaping the irreligious impulses of the French Revolution.