The Jeweler's Polish is a Catholic historical fiction novel set primarily in the small Mediterranean island of Malta at the time of the Knights Hospitaller of Saint John. Containing a near-gothic narrative that includes knightly orders, Masons, Illuminati, conspiracies, curses, mysterious jewels, apparitions of spirits, poisoners, gender dysphoria, the evil eye, and incest, The Jeweler’s Polish presents to readers the 21st century young Englishwoman, Emerald Rohan Grady, and her ancestral namesake, the Lady Emerald Esther Maria de Rohan, niece of the kindly but corrupt Grandmaster Emmanuel de Rohan-Polduc. But who, in reality, was Lady Emerald? Who was Lucas de Pinto? What made Captain Azzopardi meet his men in secret, at nighttime, in the historical city of Valletta? Who betrayed the kingdom of God and worked for the kingdom of Man? Why did Lady Emerald have to meet Pope Pius VI in Rome? How were the Jesuits and the Masons involved? Above all, who was the Repentant?

Marie Ann Dean’s familiarity with the isle of Malta and her literary skills are put to good use in constructing a near-gothic narrative, combined with an intriguing apocalyptic storyline involving the identity of the Antichrist and the timing of the Second Coming. The result is a highly entertaining read, reminiscent of The Da Vinci Code but of higher literary quality and more complex . . . a very diverting and compelling first novel that leaves enough plot threads untied to demand a sequel or two. The Jeweler’s Polish leaves the reader wanting more! - Mary Ann Beavis, Ph.D., Professor of Religion and Culture, Saint Thomas More College, University of Saskatchewan.

From the start of the story, Marie Ann Dean draws the reader into an historical mystery that will capture the imagination. She does a masterful job of tying the past history of the Church and of Europe to current times. The heroines, Emerald both of old and of new, guide the reader through an exciting adventure that falls just short of discovering the biblical Antichrist. I highly recommend The Jeweler’s Polish - James A. Toups,author of The Storm: A Time of Mercy, Choices and Hope, Principal at RMR Corporation.

In The Jeweler's Polish, the heroine Emerald's plans to travel initiate a journey to seek the 'jewels' of her heritage. The story is immersed in intrigue, secrecy, and the adventurous danger of the hunt. Traitors, mistresses, knights, and monks fill the pages of an effervescent novel. The pages turn quickly: Dean diligently weaves the tale of Emerald's search for her hereditary matrix that serves both to elude and define her. Any reader of The Jeweler's Polish who has sought family trees, or who has been fascinated by the Da Vinci Code, or Angels and Demons, will no doubt be riveted to Emerald's search. The mystery is laced with danger and delight, discovery and disappointment, with new clues uncovered and the real hidden treasure of the heroine's beneficence . . . Is it not everyman/everywoman's journey to seek their source and uncover treasures hidden for the ages - whether in Tehran, Tokyo, or New York? In The Jeweler's Polish, one finds fellow seekers, while enjoying a well of literary refreshment - Reverend Brian Miclot, Ph.D., Professor of Philosophy, Saint Ambrose University.

Malta is a fascinating, yet somewhat mysterious, island nation known throughout history as the home of the famous, but somehow also mysterious, Knights. In The Jeweler's Polish, accomplished author Marie Ann Dean brings us on one woman's fascinating voyage of self-discovery to Malta. Dean adroitly weaves together the tale of that woman's journey with events in the lives of historical figures connected with the Knights in Malta and elsewhere. As her prose portrays transformations in her characters, the reader is also brought to contemplate profound, yet very simple truths. You will enjoy The Jeweler's Polish - Monsignor Richard Soseman, J.C.L., Official of the Congregation for the Clergy, Vatican City State.

Report: Solemn Consecration of the City of Aliquippa, Pennsylvania 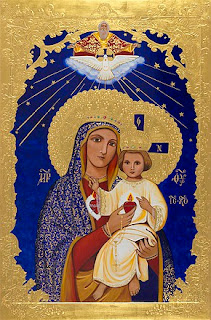 On Saturday, 4 June 2016, in a historic ceremony sponsored by the Knights of Columbus Woodlawn Council 2161, the City of Aliquippa, Pennsylvania, was solemnly consecrated to the Immaculate Heart of Mary and the Sacred Heart of Jesus.

The consecration was performed by the pastors of the three Catholic parishes located in Aliquippa, and the mayor.

The Honorable Dwan B. Walker
Mayor of the City of Aliquippa

The ceremonies began with a procession into St. George Church with the icon of the Sacred and Immaculate Hearts, the praying of the Holy Rosary, and a Divine Liturgy in honor of the Blessed Virgin Mary.  This was followed by the solemn consecration of the city.

The faithful then moved to nearby St. Titus Church for a Solemn High Traditional Latin Mass offered in thanksgiving for the consecration.  Canon Jean-Marie Moreau of the Institute of Christ the King Sovereign Priest offered the Votive Mass of Christ the King assisted by Fr. Ladis J. Cizik as deacon, and Fr. David G. Rombold as subdeacon.  The Bach Choir of Pittsburgh sang Mozart's Coronation Mass.

Additional information and a selection of photos can be viewed on the Knights of Columbus Woodlawn Council 2161 Latin Mass blog by clicking here.
Posted by Administrator No comments:

On the Immaculate Heart of Mary

St. John Eudes was a Seventeenth Century Normand French cleric who extolled the virtues of a devotion to Sacred Heart started observing a feast for the heart of Mary in 1643. When Pope Leo XIII proclaimed Eudes heroic virtues in 1903, he was proclaimed "Author of the Liturgical Worship of the Sacred Heart of Jesus and Holy Heart of Mary".

The heart that resembles that of Christ more than any other is without a doubt the Heart of Mary, his Immaculate Mother, and for this very reason the liturgy holds them up together for our veneration. Responding to the Virgin's invitation at Fatima, let us entrust the whole world to her Immaculate Heart, which we contemplated yesterday in a special way, so that it may experience the merciful love of God and know true peace.

The aim of  the devotion  to the Immaculate Heart of Mary is to unite mankind to God through Mary's heart, via consecration and reparation. One who is consecrated to Mary's Immaculate Heart as a way of being totally devoted to God.  This involves a total gift of self, something possible only with reference to God but Mary is the intermediary in this process of consecration.


O Most Blessed Mother, heart of love, heart of mercy, ever listening, caring, consoling, hear our prayer. As your children, we implore your intercession with Jesus your Son. Receive with understanding and compassion the petitions we place before you today, especially ...(special intention).

We are comforted in knowing your heart is ever open to those who ask for your prayer. We trust to your gentle care and intercession, those whom we love and who are sick or lonely or hurting. Help all of us, Holy Mother, to bear our burdens in this life until we may share eternal life and peace with God forever.
Amen.

Pope Leo XIII on the Sacred Heart of Jesus

The first Office and Mass of the Sacred Heart were composed by St. John Eudes, but the institution of the feast was a result of the appearances of our Lord to St. Margaret Mary Alacoque in 1675. The celebration of the feast was extended to the general calendar of the Church by Pius IX in 1856.

O most holy heart of Jesus, fountain of every blessing, I adore you, I love you, and with lively sorrow for my sins I offer you this poor heart of mine. Make me humble, patient, pure and wholly obedient to your will. Grant, Good Jesus, that I may live in you and for you. Protect me in the midst of danger. Comfort me in my afflictions. Give me health of body, assistance in my temporal needs, your blessing on all that I do, and the grace of a holy death. Amen.