What to Make of Ash Wednesday Marking 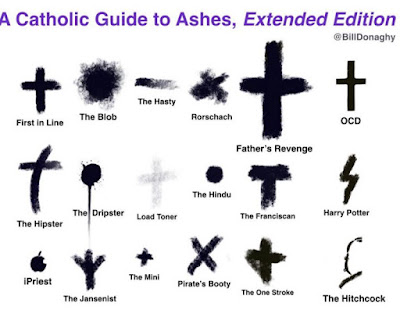 Ash Wednesday is the second most attended Mass in the Catholic calendar, even though it is not officially a holy day of obligation.

One of the features of the Ash Wednesday liturgy is the application of ashes on the faithfuls' foreheads to mark the start of Lent to represent our consciousness of our own sin and need for repentance. These sacramentals are not uniformly applied in the same manner, hence the waggish graphic of Ash Art.

Some non-liturgical Protestants question whether Christians should advertise their faith by walking around wearing schmutz on their forehead. They would question why we are not adhering to Matthew's admonition not to trumpet their faithfulness in public.

However, walking around with Ashes on their forehead is not exactly a boast of one's virtue.  In fact it is the opposite.  And unless Fr. Hollywood applies "The Hitchcock" or "Harry Potter" ashes, the mark is a variation of the Cross.  In the ancient world, the cross was a sign of shame, as it was the cruel way the Romans enforced their authority against "criminals".  In Christendom, it is a reminder of the Via Dolorosa which each of us are invited to take in our walk of faith.

Lest anyone think that Ash Wednesday Ash art is just a benign symbol, consider the case of Stuart Varney.  In 2001, the host of CNN's Moneyline, quit after CNN head honcho Ted Turner mocked those with ashen crosses on their foreheads as "Jesus Freaks".
Posted by DC Calamity