The Amorality of Atheism 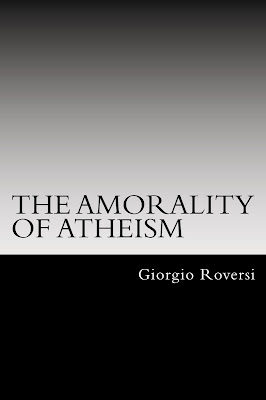 Giorgio Reversi has written a book entitled 'The Amorality of Atheism', the contents of which seem as relevant today within the Catholic Church as it is in its endeavour to reach the hearts and minds of those outside of the Church.

We must seriously ask the question why it is that laymen and women who have undergone no PhDs or Masters Degrees in theology are able to articulate the Catholic Faith in understandable ways but those who are considered moral theologians - even moral theologians who are praised by the highest authorities in the Church - can only find ways in which to undermine the credibility of that same Faith.

Please find below a taster of Giorgio's clear explanations of Catholicism and another timely - and much needed - rejection of the errors of atheism.

And the Logos was made flesh, and dwelt among us

I don’t deny that Jesus Christ can be regarded as a great moral teacher. But so was Confucius, who taught - five centuries before Christ – "Do not unto another that you would not have him do unto you. Thou needest this law alone. It is the foundation of all the rest.” This is the Golden Rule on which I believe our morality should be based upon.

I don’t have a problem with Christianity per se, rather with your fundamentalist, exclusivist approach. And I admire moderate, liberal Christians who are more concerned with social justice and the protection of the environment than theological diatribes, as you seem to be.

Our atheist’s words remind me of an aphorism by Colombian philosopher Nicolas Gomez Davila: “Overstated admiration for Jesus Christ as a moral teacher immediately betrays the atheist”. It also betrays - I should add - a Christian who is indistinguishable from an atheist. But I will further comment on that in a moment.

Which brings me to the next point. Our atheist friend states that Jesus Christ can be regarded as a great moral teacher. As C.S. Lewis famously noted, this is the one thing we must not say, because a man who was merely a man and said the sort of things Jesus said would not be a great moral teacher, but a lunatic. Jesus made himself “equal with God" (John 5:18) and even went so far as to use the very words by which God revealed Himself to Moses from the burning bush (John 8:58). Indeed, Jesus was put to death not because he upheld a radically alternative set of moral principles - in which case he would merely have had a pleasant discussion with Scribes and High Priests on the exegesis of scriptures -, but because He identified Himself with the ultimate reason for those principles, thus affirming His divinity.

Christianity is in fact the religion that identifies in Jesus the ultimate reason for our moral principles, for our “Golden” rules. To quote John’s Gospel, He is the Logos of God, the Reason for all things made flesh. "I am the way and the truth and the life. No one comes to the Father except through me” (John 14:6). A rather “fundamentalist”, “exclusivist approach”, I would say. But this is the core belief of Christianity, which our atheist friend does seem to have a problem with. Anything else is its politically correct parody.

I said that overstated admiration for Jesus Christ as a moral teacher betrays a Christian who is indistinguishable from an atheist. This is, I believe, the key to understanding the phenomenon of secularisation and de-Christianisation that has swept Western society in the last few decades. At the root of secularisation is not merely the non-belief in the existence of God, but the acceptance of the atheist dogma of a morality without God, of a set of moral values, of “Golden Rules” independent from God, from Christ, who therefore becomes irrelevant. Christians in the West have not only passively endured a process of secularisation; they’ve actively promoted it, in so far as they’ve adopted the secular notion that morality can exist without God.

The “moderate”, “progressive”, “liberal Christians”, “concerned with social justice and the protection of the environment”, who see the Gospel simply as a 'Handbook' for 'Moral Guidance’, and the divinity of Christ as a cause of embarrassment, an unnecessary occasion of disagreement with atheists and people of other faiths, have reduced the Church to a campaigning force for social justice, indistinguishable from secular organisations, de facto annulling the social, cultural and political relevance of Christianity. It’s no wonder our atheist friend admires them. They have in a way succeeded where even the most zealous militant atheists have failed.


Step forward Cardinal Marx and Cardinal Kasper. 'The Amorality of Atheism' can be purchased for £1.99 on Amazon Kindle. There are not an abundance of recommendable Catholic books which confront the atheists of our age. Good men take time and for the love of God expend a great deal of energy, often at a cost, to communicate the Catholic Faith during a time when the world - and great parts of the Church - are hostile to the supernatural Faith that is required for us to live and pray as adopted children of God.

Bravo to Giorgio Reversi for putting pen to paper and compiling a consistent and thorough rebuttal to the new atheism that has ravaged the West inside and outside Holy Mother Church. Why not purchase a copy for yourself and for atheist friends? It may be worthwhile sending a few copies to the Bishops at the Synod, because ultimately, as Nicholas Bellord has made so clear in his five part series of blogposts on the Shadow Synod, at the heart of the matter is Faith, and whether we believe in the God revealed in and taught by the Church for 2,000 years, or whether we deny His existence as revealed through Scripture and Tradition.
Posted by The Bones