A Bit on Justifying Georgemas

According to the Gregorian calendar, April 23rd is the Feast of St. George (or Georgemas).  The Orthodox also admire the attributes of St. George but follow the Julian calendar which marks the feast on May 6th.  St. George born in Syria Palestrinia in the late Third Century who served as an officer in the Roman army that guarded the Emporer Diocletian, but who was martyred for not renouncing his Christian faith.  The emperor tried to bribe George to renounce his faith and tortured him, but to no avail. Before he was decapitated, St. George gave all of his wealth to the poor.

St. George is one of the most venerated saints in the Catholic Church, among Anglicans, Orthodox, East Syrian churches. Even Muslims revere this honorable military man. In the Twelfth Century a legend was attached to St. George about slaying a dragon.  The standard Orthodox icon of St. George depicts him slaying a dragon with a woman in the background. 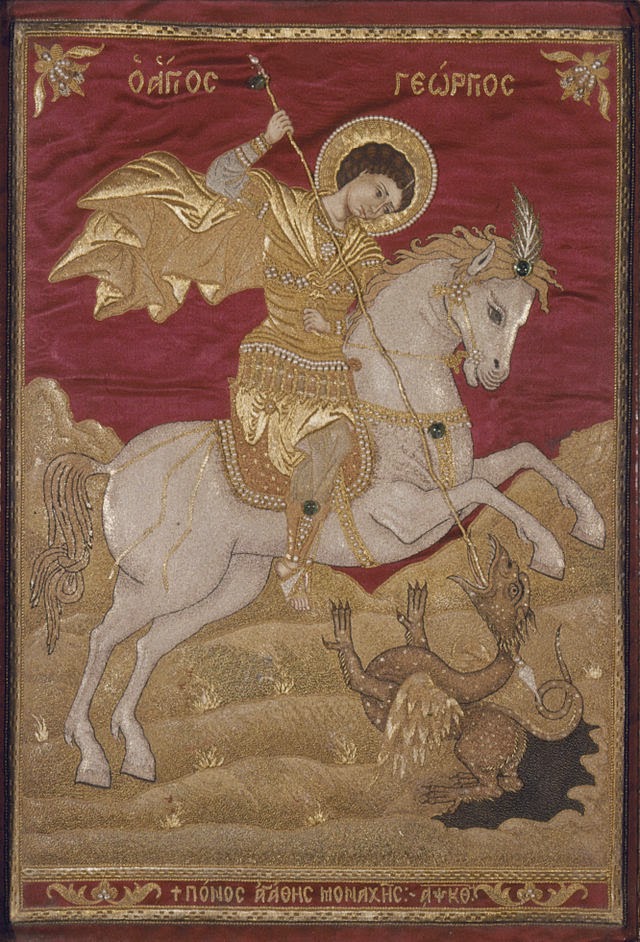 The dragon is generally understood as being both Satan and the monster from his own life (Diocletian). The woman in the background is Alexandra, the wife of Emperor Diocletian. Crusaders credit an appearance of St. George. This was probably legend which traveled back with the Crusaders from the Holy Land and was embellished in courtly Romance retellings.

***
St. George is the patron saint of England yet it is not a public holiday in England. The reasons why celebration of Georgemas is muted are cultural, historical and now tinged with political correctness.

St. George was neither English nor roundly associated with England, even though King Edward III formed the Order of the Garder under the patronage of St. George in 1348.  The Reformation played a part as Protestants did not care much for saints' days. In addition, celebration of St. George's day has been in decline since the Act of Union between England in Scotland completed in 1707.  In today's world,  the Daily Telegraph reports that many English people are concerned that national symbols like St. George can be considered racists, 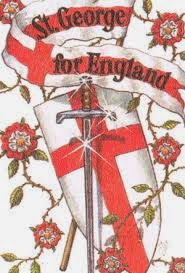 Aside from the fact that many pubs in England are named after George and the dragon, it makes one wonder why this legend matters. Modern man is quick to dismiss myths (unless it is anthropogenic global warming), but this is short sighted. Myths convey essential truths although the romantic story elements may not be exact.

The reason that St. George matters so much to the English is that the legend reinforces characteristics which the English admire and seek to emulate.  St. George is a knight who exemplified chivalry. St. George and the dragon also champions the little guy as well as the triumph of good over evil.  The versions which depict him making the sign of the cross depict deep dedication to principles (if we dare not declare faith).  These romanticized virtues along with the more verifiable versions of his hagiography make St. George a man worthy (bank holiday or not) for Englishmen to emulate.