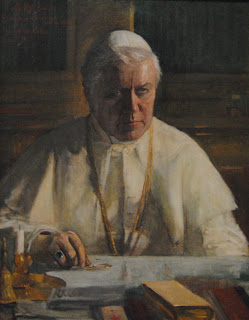 Obviously, in the three posts to which I am limiting myself on this great encyclical, Pascendi Dominici Gregis, I cannot unpack everything. But, I want to highlight a few points which to the discerning mind are extremely topical this week. Here is Pope St. Pius X on the overlap of the false idea that religious sentiment must allow for the evolution of dogma or doctrine. This is connected to the basic faulty thinking on the source of religion and the source of religious yearning in humans. Recently, on a highly popular English blog, I was reading that moral dilemmas cannot be solved as humans do not have the means to determine revelation, as God has spoken to us in a cloud. This popular idea is linked to relativism, but also a deeper mistrust of an institutional teachings of the Catholic Church or any direct revelation found in both the New and Old Testaments. One author claimed that as Christians we still can make decisions for good or evil after we die, as then we shall see things clearly. Of course, the moral subject being discussed was the good or evil of homosexual marriage.

Too bad that the author has no clue as to the philosophy of natural law or the infallibility of Revelation as taught by the Catholic Church. Of course, when Protestants or New Agers deny Tradition, the impulse for religion becomes purely personal and subjective. Then, one falls into false hope for yet another try after death. According to this author on the blog I was reading, no one can make true moral decisions as humans simply do not have enough information at this time to do so. Progressivism-as in Star Trek, will enable the soul to evolve and mature. So, too, doctrines and dogmas will change as humans get more intelligent.

Sola everything, (as in sola fide, sola gratia, solus Christus, sola Scriptura, and sola gloria) has led to sola nothing. And as Catholics, we know this is the logical end of throwing out the Tradition and Revelation of the Church.

This type of relativistic and non-rational thinking has crept into the Church to the point of making a separation between dogmatic, liturgical, moral,  exegetic, ascetic and apologetic theologies and pastoral theology. I have bold-faced the sections which are pertinent.

There is no distinction between pastoral and the other theologies. Of course, the Modernist fallacy of separating heart and head began in the Protestant Revolt, as seen in many of the emphases on emotions, enthusiasm and personal, private conversion outside an established Church. The number of errors which emanate from the division of the Christian religion from both Revelation and Tradition form the basis of Modernist heresies. I call this particular one I am looking at today the heresy of sincerity. So many people believe that if they are sincere, they are correct in their judgements about morality and doctrines.

Fill in the blanks as you read....according to the Modernists...The words from the Encyclical are in blue. I give one for the background and the second for the problem. I cannot review all the hydra-heads of Modernism, but many of the heresies come from older ones, such as Pelgianism, Donatism, Arianism and Fideism. But, I want to stick with subjectivity and relativism here.

Here it is well to note at once that, given this doctrine of experience united with the other doctrine of symbolism, every religion, even that of paganism, must be held to be true. What is to prevent such experiences from being met within every religion? In fact that they are to be found is asserted by not a few. And with what right will Modernists deny the truth of an experience affirmed by a follower of Islam? With what right can they claim true experiences for Catholics alone? Indeed Modernists do not deny but actually admit, some confusedly, others in the most open manner, that all religions are true. That they cannot feel otherwise is clear. For on what ground, according to their theories, could falsity be predicated of any religion whatsoever? It must be certainly on one of these two: either on account of the falsity of the religious sentiment or on account of the falsity of the formula pronounced by the mind. Now the religious sentiment, although it may be more perfect or less perfect, is always one and the same; and the intellectual formula, in order to be true, has but to respond to the religious sentiment and to the Believer, whatever be the intellectual capacity of the latter. In the conflict between different religions, the most that Modernists can maintain is that the Catholic has more truth because it is more living and that it deserves with more reason the name of Christian because it corresponds more fully with the origins of Christianity. That these consequences flow from the premises will not seem unnatural to anybody. But what is amazing is that there are Catholics and priests who, We would fain believe, abhor such enormities yet act as if they fully approved of them. For they heap such praise and bestow such public honour on the teachers of these errors as to give rise to the belief that their admiration is not meant merely for the persons, who are perhaps not devoid of a certain merit, but rather for the errors which these persons openly profess and which they do all in their power to propagate.

If sincerity and good will are all that are needed to obtain holiness, then we should all be saints. And, if we are evolving in spirituality as a species (lol), should not societies be getting better rather than worse? As to the separation of the theologies, is not that error common among those both priests and laity who want to accomodate all belief systems, including atheism?

Dogma is not only able, but ought to evolve and to be changed. This is strongly affirmed by the Modernists, and as clearly flows from their principles. For amongst the chief points of their teaching is this which they deduce from the principle of vital immanence; that religious formulas, to be really religious and not merely theological speculations, ought to be living and to live the life of the religious sentiment. This is not to be understood in the sense that these formulas, especially if merely imaginative, were to be made for the religious sentiment; it has no more to do with their origin than with number or quality; what is necessary is that the religious sentiment, with some modification when necessary, should vitally assimilate them. In other words, it is necessary that the primitive formula be accepted and sanctioned by the heart; and similarly the subsequent work from which spring the secondary formulas must proceed under the guidance of the heart. Hence it comes that these formulas, to be living, should be, and should remain, adapted to the faith and to him who believes. Wherefore if for any reason this adaptation should cease to exist, they lose their first meaning and accordingly must be changed. And since the character and lot of dogmatic formulas is so precarious, there is no room for surprise that Modernists regard them so lightly and in such open disrespect. And so they audaciously charge the Church both with taking the wrong road from inability to distinguish the religious and moral sense of formulas from their surface meaning, and with clinging tenaciously and vainly to meaningless formulas whilst religion is allowed to go to ruin.

To be continued...
Posted by Supertradmum