495 years ago today, Luther opened a can of worms 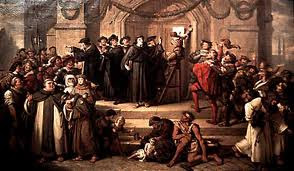 Knocking the Church, as popular in 1517 as it is today


On October 31st 1517, Martin Luther nailed his 95 revolutionary opinions to the door of the Castle Church in Wittenburg.

In so doing he set in motion a series of cataclysmic events that would shatter the Catholic world.

Foremost of his concerns was the so called selling of indulgences.

We know from Chaucer and others that such abuses occurred but there is a narrow line between charging for an indulgence and making an offering or paying a stipend.

The chantry system whereby the laity paid for Masses to be said for their souls and those of their loved ones was an established and popular practice; it continues to some degree today when we hand in our list of names of deceased family members with our November offering.

Catholics have always contributed to the support of their pastors and it is encumbent upon us to do so.

Nothing wrong in that. In fact, there is a great deal of good in it.

And today, when we wish for a Mass to be offered for a special intention, we include a stipend as a contribution to the priest. Would Luther classify that as 'buying a Mass?'

The selling of indulgences in the 16th century was not really the foundation block that Luther planned to reconstruct the Faith from but it was a good 'headline' catcher and he used it against the Church much as today, clerical abuse is used as a means of attempting to destroy something that is fundamentally sound, fundamentally good, the Church led by Pope Benedict XVI.

So now, on this anniversary of the birth of Protestantism, let us remember those among us who have died and may be in Purgatory and compile our lists ready for the month of the Holy Souls.

Apart from fulfilling yet another of our requirements, praying for the dead, it is also a very good indicator that Luther did not succeed.

The Church that he despised is still strong; it weathers all storms and, it will triumph with the help of Our Blessed Lord and His Mother.

Email ThisBlogThis!Share to TwitterShare to FacebookShare to Pinterest
Labels: Birth of Protestantism, Luther anniversary, Martin Luther nails his 95 opinions to the door of the church