Our Patron's Feast Day: Blessed Titus Brandsma, pray for us! 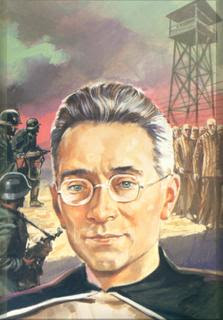 Today is the feast day of Blessed Titus Brandsma, patron of this blog and the Guild for Catholic bloggers that bears his name. In recognition of his patronage of the Guild of Blessed Titus Brandsma and in thanksgiving to God for his life and witness, here is a short introduction to his life.
Anno Sjoera Brandsma was born on February 23 1881. He was a native of Friesland, Netherlands, and grew up in a small farming village. He also came from a good Catholic family, and his father was recognised as a local defender of the faith.
Titus Brandsma felt an early calling to the priesthood and to the religious life. After originally applying to the Franciscans, with whom he studied for a while, ill health forced Anno to join the Carmelites at Boxmeer - where he was given the name Titus, and took his first vows in 1899.

After his ordination in 1905, Fr Titus Brandsma O.Carm gained a Doctorate in philosophy from the Pontifical Gregorian Univeristy in Rome. Afterwards, he taught at the Carmelite seminary at Oss, Netherlands, and edited the local daily newspaper. He would often enjoy a cigar whilst working on various publications!

Bl Titus Brandsma went on to lecture in philosophy at the Catholic University in Nijmegen - a city that would later declare him to be their most honoured son. He also travelled widely, and worked tirelessly as a journalist, author, and lobbyist for the University. In 1932, he was appointed President of the Catholic University, and was made ecclesiastical advisor to Catholic journalists in 1935.

In the same year, Titus Brandsma wrote against the Nazi anti-Jewish marriage laws. He later wrote that no Catholic publication could publish Nazi propaganda and still call itself Catholic - which brought him to the attention of Dutch National Socialists. After the invasion of the Netherlands, Bl Titus Brandsma was constantly followed by the Gestapo. He was finally arrested on 19 January 1942, after having written a Pastoral Letter on behalf of the Dutch Bishops, in which Nazism was declared incompatible with the Christian faith. For several weeks he was shuttled from jail to jail, abused, and severely punished for ministering to other prisoners.

Bl Titus Brandsma was deported to the Dachau concentration camp in June 1942. Whilst there he was overworked, underfed, and beaten daily - but he would always ask his fellow prisoners to pray for the salvation of the guards. He also wrote many mystical reflections on the true nature of suffering during his internment at this brutal camp.
When he could no longer work, he was used for torturous medical experiments. And when he became no longer any use for experimentation, he was murdered by lethal injection - which happened on 26 July 1942. The nurse who assisted the SS doctor responsible for killing Fr Brandsma was herself a lapsed Catholic. Through remembering his witness to Christ's love for all people, this nurse later returned to the Faith. One of Bl Titus Brandsma's last acts was to give his Rosary beads to the doctor who killed him.

Titus Brandsma was beatified by Blessed Pope John Paul II on 3 November 1985, and 27 July was appointed as his feast day.

We are really blessed to have such a great Catholic hero as patron of our Guild and its common blog! Today, I am sure that all members of the Guild of Blessed Titus Brandsma will want rededicate themselves to the work of Catholic blogging in a way worthy of this saint. We also thank God for the bravery and love that Blessed Titus showed throughout his life, and for his love of writing, education and journalism. We also call on Blessed Titus Brandsma's intercession and for his heavenly protection and guidance. May he always look after Catholic bloggers, intercede for us, and bring us to a greater knowledge of Our Lord Jesus Christ!
Blessed Titus Brandsma, pray for us!
Posted by Dylan Parry, A Reluctant Sinner blog
Posted by A Reluctant Sinner