How one of the joys of Catholic blogging led to the posting of this modern-day parable...

I'm sure that one of the joys we all experience as Catholic bloggers is the fact that friendships can be formed with those who comment on our sites. Over the past year, or so, I have entered into correspondences with several of my blog's regular commentators. Some have been based as far away as the middle of the Arizona desert, whilst others happen, through sheer co-incidence, to attend the same London church that I do! Last night, one such friend, called Anne, sent me this wonderful anecdote (or "parable") called "Do you know where you're going?" She suggested it might make for a reflective post. I agree. So, here it is: - 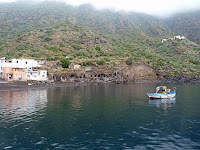 An American tourist while visiting a tiny village in Sicily complimented the Sicilian fisherman on the quality of his fish and asked how long it took him to catch them.

"Not very long," answered the Sicilian.

"But then, why don't you stay out longer and catch more?" asked the American.

The Sicilian explained that his small catch was sufficient to meet his needs and those of his family. Then the American asked, "But what do you do with the rest of your time?"

"I sleep late, then I fish a little, and in the afternoons play with my children. In the evenings I go into the village to see my friends, dance a little, drink a bit, and sing a few songs," replied the Sicilian.
Then the American said, "I have an MBA from Stanford and can help you. You could start by fishing longer every day. You could then sell the extra fish you catch. With the revenue, you could buy a bigger boat. With the extra money the larger boat will bring, you could buy a second one and a third one and so on until you have an entire fleet of trawlers. Instead of selling your fish to a middleman, you could negotiate directly with the processing plants and maybe even open your own plant. You could then leave this little village and move to Milan, London or even New York City! From there you could direct your enterprise."

"How long would that take?" asked the Sicilian.

"That's when it gets really interesting," answered the American, laughing. "After that you'll be able to retire, live in a tiny village near the coast, sleep late, catch a few fish, play with your grandchildren and spend your evenings singing, dancing, playing and drinking with your friends."

Then the Sicilian fisherman asked: "With respect, that is what I am doing now. Why take the 25 years?"

...The moral of the story: "Know where you're going. You may already be there!"

Thank you, Anne, for this modern-day parable! Just like those stories told by the Desert Fathers, these simple tales that can, if we let them, help us stop and think about the really important things in life.
Also, I'd like to take this opportunity to thank all those who read our blogs and who make the effort to comment on what we write. God bless you!
[Image: A small fishing-boat in Rinella, Sicily; this image is published under a creative commons licence and is attributed to Ji-Elle; source: Wikimedia Commons]
Posted by Dylan Parry A Reluctant Sinner
Posted by A Reluctant Sinner