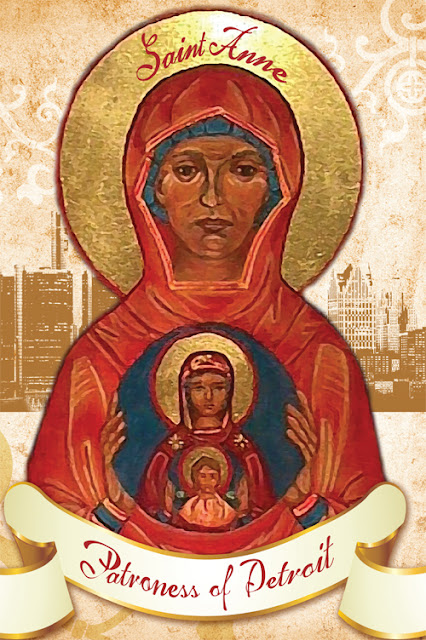 Although both the Eastern and Western Churches have ascribed to the sinless conception of Mary the Mother of God, it dogmatically proclaimed as the Immaculate Conception until the 1854 ex cathedra papal bull  Ineffabilus Deus by Pope Pius IX.

Due to unclear contemporary catechesis, a minimization of Mariology and its place on the liturgical calendar near the start of Advent, the Solemnity of the Immaculate Conception can be mistaken as the sinless conception of Jesus rather than His mother Mary.  As a child of Vatican II, I struggle with mystagogical necessity of the Immaculate Conception--how can our sinless savior be born from a Mother with sin? Nevertheless, I accept it as a mystery of faith which I may not wholly appreciate but that I believe.

Perhaps a better way to understand the Immaculate Conception is through an Eastern approach.  On December 9th, Orthodox Christian Churches celebrate the Conception of the Most Holy Theotokis by St. Anne.  Celebrating St. Anne should have significance to the City of Detroit, which the Vatican named as its patroness in 2011.

One of the common synonyms for Mary the Mother of God is as Theotokis or god-bearer.  To me, that semantical construction  god-bearer calls to mind the Ark of the Covenant from the Book of Exodus, where God dwelled among His people. This is rich with symbolic significance and points to our Savior.

Typically we think of the Immaculate Conception as Mary, the Mother of God, being born without sin (the unblemished Tabernacle for the Incarnation).  That being said, it seems more useful to consider Mary as being full of the Holy Spirit.  So rather than focusing on herself, she could magnify the Lord through her son Jesus Christ.

So to celebrate the Conception of the Theotokis by St. Anne and its consequence, we can reflect upon portions of the Orthodox Divine Liturgy as scored by Arvo Part.

Rejoice, O virgin Mary, full of grace, the Lord is with thee: blessed art thou among women, and blessed is the fruit of thy womb, forthou hast borne the Saviour of our souls.