In The Shadow of The Triumph of The Cross

I was at Notre Dame for six years and have a degree from there. Being at Notre Dame creates a sensitivity to the great Feast of the Triumph (or Exaltation) of the Cross. as it is the patronal feast of the order. The order is called the Congregation of the Holy Cross. I also had the nuns of this order for eight years of elementary school. The order produced many excellent teachers.

The founder, Blessed. Basil Moreau, C.S.C., created the order in 1837 in order to meet the terrible needs of the French people after the destruction of schools and churches in the French Revolution.

His love of the Eucharist and the Cross became central devotions of the order. In 1842, Father Moreau sent a small group of priests and brothers to the wilds of Indiana in order to help both the French settlers, the English settlers and the very few Natives left in the area. Rev. Edward Sorin, C.S.C and his men founded Notre Dame with a small log cabin and a vision of education.

The mission of the order from the beginning was education of the mind and the heart. One of their own is a saint, Saint Andre Bessette. It is ironic that the high-powered, intellectual order (my teacher-nuns were top-notch), has a simple porter for a saint. It is about this humble brother that I want to write in order to highlight the patronal feast day, which is tomorrow. 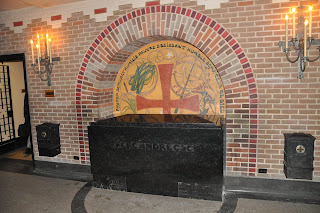 The Triumph of the Cross is the feast resulting from the finding of the true Cross in Jerusalem by St. Helena in 326. Some historians put the date of the feast as early as the dedication in Jerusalem of the Church of the Holy Sepulchre in 335.

The Exaltation of the Cross remains a huge feast in the East. Can one imagine if the West developed processions and special devotions at this time to honor the Cross "on which held the salvation of the world"?

Saint Andre Bessette lived a life in the shadow of the Cross. He was orphaned by the age of twelve, and finally entered the Congregation of the Holy Cross in 1870. He was 25. Because he was not highly educated, and a brother, Saint Andre was made the porter at the Notre Dame College in Montreal. 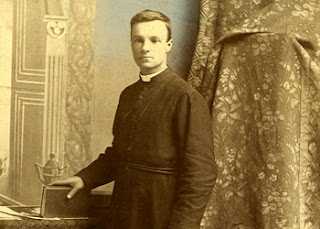 The authorities began to notice something. People were coming to visit this lowly porter. People would ask his for prayers and they were healed.  Saint Andre was one of these persons who attained holiness through grace and prayer at an early age. But, he was to live until January 6, 1937. It was estimated that at his funeral, a million people came.

One wonders at such an unknown, unimportant person being so close to God, but this is the way of God.

Saint Andre understood the Cross. He did not shrink from humility or suffering. His charism of healing was a direct result of prayer and simplicity of heart.

The largest church in Canada, Saint Joseph’s Oratory of Mount Royal, is a direct result of Saint Andre's love of Saint Joseph.

The connection between the Exaltation of the Holy Cross and Saint Andre inspires all of us today. We all have various calls and gifts from God. Most of these are unknown to the larger world. Nothing matters except that we accept the smallness of our beings and cling to the Cross of Christ.

The Triumph of the Cross is the personal triumph of the salvation of each one of us. Saint Andre cooperated in his love and prayer with graces God gives to all of us. Just as Christ's Death was missed by most of the world, just as Our Lord's Passion occurred in an obscure part of the world, witnessed by very few, so too, Saint Andre's little life remained hidden until God decided to show the world the little light.

No suffering is wasted in God. No life is too small not to create life in others. We can triumph in the Cross daily.
Posted by Supertradmum