A Review of A Great Pope And A Great Encyclical

Every time I read the great Encyclical, Pascendi Dominici Gregis, by Pope St. Pius X, I am amazed at how prophetic it was and how timely it is today. I would like to quote a few sections which apply directly to the politics of several nations in the West and politics within the Church. 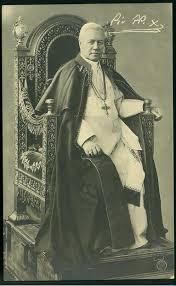 We make no delay in this matter is rendered necessary especially by the fact that the partisans of error are to be sought not only among the Church's open enemies; they lie hid, a thing to be deeply deplored and feared, in her very bosom and heart, and are the more mischievous, the less conspicuously they appear. We allude, Venerable Brethren, to many who belong to the Catholic laity, nay, and this is far more lamentable, to the ranks of the priesthood itself, who, feigning a love for the Church, lacking the firm protection of philosophy and theology, nay more, thoroughly imbued with the poisonous doctrines taught by the enemies of the Church, and lost to all sense of modesty, vaunt themselves as reformers of the Church; and, forming more boldly into line of attack, assail all that is most sacred in the work of Christ, not sparing even the person of the Divine Redeemer, whom, with sacrilegious daring, they reduce to a simple, mere man.
In the recent past, in 2012,  Pope Emeritus Benedict stated that the grave problems involved enemies within the Church. These are those who do not obey the Teaching Magisterium of the Church in matters of correctly forming their consciences to conform to Tradition and Revelation, as in the matters of contraception and abortion, marriage, liturgy.

The saintly Pope Pius X writes that the Modernists,  are wont to display a certain contempt for Catholic doctrines, or the Holy Fathers, for the Ecumenical Councils, for the ecclesiastical magisterium; and should they be rebuked for this, they complain that they are being deprived of their liberty. Lastly, guided by the theory that faith must be subject to science, they continuously and openly criticise the Church because of her sheer obstinacy in refusing to submit and accommodate her dogmas to the opinions of philosophy; while they, on their side, after having blotted out the old theology, endeavour to introduce a new theology which shall follow the vagaries of their philosophers.
We can see this in the so-called pro-choice Catholic politicians, or in the Catholics who maintain that civil unions for homosexuals do not contradict either natural law or the Church's teaching. And, the brilliant Pope continues
Concerning immanence it is not easy to determine what Modernists mean by it, for their own opinions on the subject vary. Some understand it in the sense that God working in man is more intimately present in him than man is in even himself, and this conception, if properly understood, is free from reproach. Others hold that the divine action is one with the action of nature, as the action of the first cause is one with the action of the secondary cause, and this would destroy the supernatural order. Others, finally, explain it in a way which savours of pantheism and this, in truth, is the sense which tallies best with the rest of their doctrines.
This is the great error in the thinking of the leaders in the United States and Europe, who contradict natural law on the basis that somehow, God is working in some sort of false progressivism (the Star-Trek heresy) which holds that we, in 2013, are smarter and holier than the 2,000 years of Christians who have gone before us. Arrogance stands firm against the Church. Of course, when natural law is ignored or twisted into some type of relativism, the supernatural order in a nation erodes and, finally, is destroyed. We have had plenty of warning, over a hundred years, in fact, to get ready for the onslaught on religious freedoms we see today. This encroachment of Modernism did not suddenly happen. The date of this Encyclical is 1907. The prophetic nature of this document will even more clearly be seen in my second part which I shall post in a day or two, on the nature of Church and State relations. But, look carefully at the inspiration in this section: God was trying to get our attention 106 years ago. Who was paying attention? Who is now?

Here is the holy Pope again:
For we are living in an age when the sense of liberty has reached its fullest development, and when the public conscience has in the civil order introduced popular government. Now there are not two consciences in man, any more than there are two lives. It is for the ecclesiastical authority, therefore, to shape itself to democratic forms, unless it wishes to provoke and foment an intestine conflict in the consciences of mankind. The penalty of refusal is disaster. For it is madness to think that the sentiment of liberty, as it is now spread abroad, can surrender. Were it forcibly confined and held in bonds, terrible would be its outburst, sweeping away at once both Church and religion. Such is the situation for the Modernists, and their one great anxiety is, in consequence, to find a way of conciliation between the authority of the Church and the liberty of believers.