Some of a Jack Chick Obituary-- Adios to One Crazy Chick 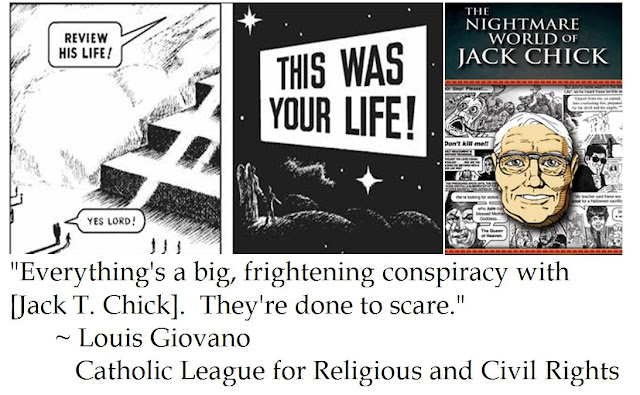 Jack T. Chick died at the age of 92 in Glendale, California.  Chick was infamous for publishing fundamentalist Christian tracts in the form of comic books for six decades and distributed over 750 million copies and has been translated into over 100 languages.

Chick's personal paranoia carried over into his funny paper tracts. While he railed against rock and roll, homosexuality and witchcraft, Chick saved most of his spite for Catholicism.  If one were to believe Chick. Catholicism was created by Satan, that Popes take their marching orders from the devil.  Chick blamed the Jesuits for starting the American Civil War (and that the "men in black" backed the Confederacy) as well as the Ku Klux Klan (which hated Catholics).

In addition, Chick claimed that the Catholic Church supposedly started Nazism, Communism, Islam, Masonry, Jehovah's Witnesses, Mormons and the New Age movement. Chick pinned the assassination of Abraham Lincoln and John F. Kennedy on the Vatican as well as the Holocaust. Continuing in this craziness, Chick surmised that the Vatican runs the United Nations and global finances and the Illuminati..  Amongst the biggest whoppers was that the Vatican has a super computer that tracks the names of every Protestant in the world.

Naturally, in the end times Chick proclaimed that the Antichrist would be the last Pope. It must have really freaked Chick out that Pope Francis is from the Society of Jesus (i.e. a Jesuit). No surprise that Catholic anti-defamation groups chronicled Chick tracts for over three decades.


One of Jack Chick's early successes was an early 1960s tract of a playboy who dies and is forced to watch all of his life's foibles on a big screen before the pearly gates of Heaven. Perhaps during this Extraordinary Jubilee Year of Mercy, Chick's imagined screening of "This Was Your Life" at the Pearl Gates Cinescreen won't be taken as "The Nightmare World of Jack Chick" but will be viewed as a Comedy of Manners.