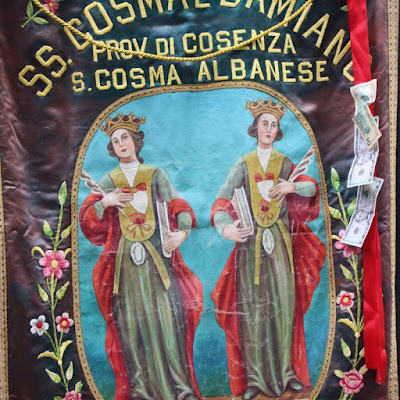 On Sunday, 4 October 2015, members of the  Arbëreshë, or Italo-Albanian , community of San Cosmo Albanese (a village in Calabria, Italy), gathered at the Church of the Most Precious Blood in New York City’s Little Italy neighborhood, to celebrate the 112th annual Feast of Saints Cosma and Damiano, the patron saints of the village.

That Liturgy, Father Romanos explained, differed in many respects from the Latin.  A few noticeable differences include the way the sign of the Cross is made, which is right to left in the Byzantine form, with the first and middle fingers coming to a point with the thumb.  These three, fingers and thumb, symbolize the Trinity, while the two fingers alone represent the dual nature of Christ.  There is also no kneeling in the Byzantine Rite, and Communion is received with arms crossed over the chest and the leavened Host dipped into consecrated wine before being placed on the tongue. 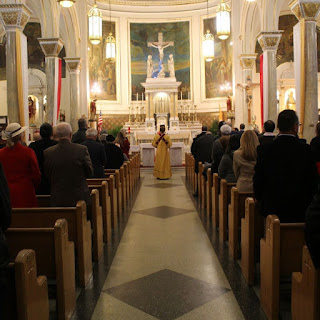 Father Romanos also conveyed how this Rite was brought from Albania to the hills of southern Italy in the 15th Century with faithful Albanian Christian settlers, the Arbëreshë, who fled the conquest and Islamization of their homeland by the advancing Turks.  Though he slowed down that advance, even George “Skanderbeg” Kastrioti, the Albanian hero, was not able to completely stop it.

So it was that in the following centuries Albanian villages sprouted up throughout southern Italy, especially in the regions of Calabria, Sicily, Basilicata, and Apulia.  The people were able to assimilate perfectly into their new land, but also retained their own language, customs, and cuisine throughout the centuries and up to this present time.   With their religious tradition they brought with them an icon depicting the Madonna holding the infant Jesus with her left arm and pointing to Him with her right hand.  This icon is known as the Hodegetria, Greek for “She Who Shows Us the Way.” 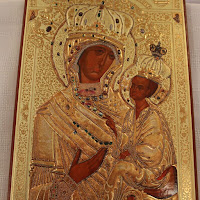 During his homily, Father Romanos reminded us that more people have given their lives for the Christian Faith in the 20th and 21st Centuries, than all previous centuries combined.  He also spoke about the patron saints of San Cosmo Albanese; the martyrs San Cosimo and San Damiano:  Arab Christians who lived by the motto “what you have freely received, freely give.”  They were physicians of both the body and of the spirit, and never took payment for their services.  The brothers suffered martyrdom in Syria during the great persecution of Christians by the Emperor Diocletian.  They were arrested by order of the Prefect of Cilicia and were hung on a cross, stoned, and shot by arrows before being beheaded for staying true to their faith.

The Cross and Hadegetria were available for veneration after Mass, followed by lunch, coffee, dessert, and a raffle downstairs. 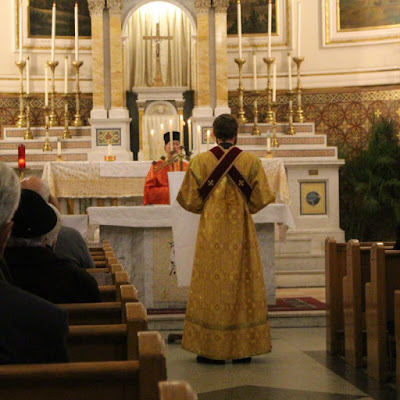 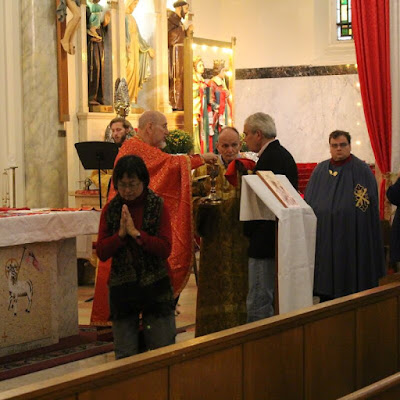 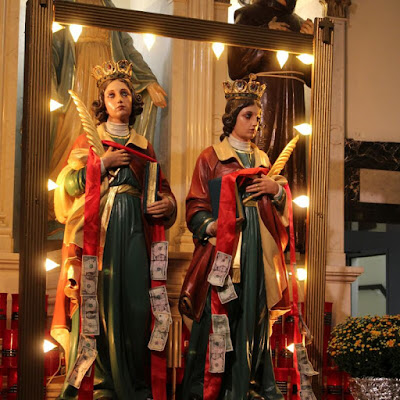 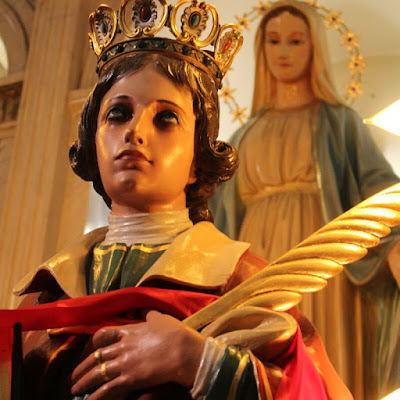