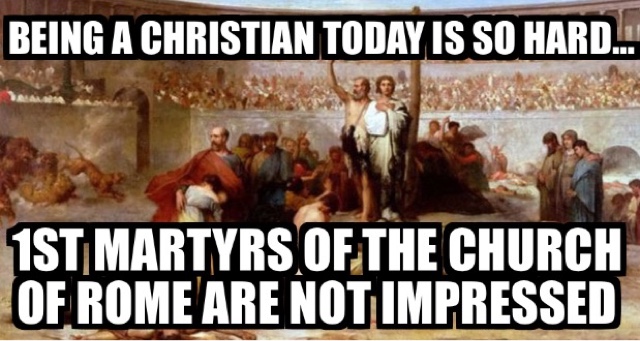 'He took me in spirit to a desert, and there I saw a woman riding a scarlet beast which had seven heads and ten horns and had blasphemous titles written all over it. The woman was dressed in purple and scarlet and glittered with gold and jewels and pearls, and she was holding a gold winecup filled with the disgusting filth of her prostitution; on her forehead was written a name, a cryptic name: 'Babylon the Great, the mother of all the prostitutes and all the filthy practices on the earth.' I saw that she was drunk, drunk with the blood of the saints, and the blood of the martyrs of Jesus; and when I saw her, I was completely mystified.'


This blog was established as a central hub linking various Catholic blogs under an umbrella group called The Guild of Blessed Titus Brandsma. Members of the Guild meet very sporadically to discuss Catholic issues and issues affecting Catholic bloggers. As a Guild, we do not exist for ourselves but for the chief mission of the Church which we understand to be the Salvation of souls which we hope to further through our writing. By writing, on our blogs and on this one, we hope to draw men and women to the love of God in His One, Holy, Catholic and Apostolic Church.

Yet, as anyone who, even occasionally, visits Catholic blogs will realise - and I understand that they are not a great multitude, great alarm, even panic is being raised within the Catholic blogosphere over a new direction being taken in Rome which seems very much to strategically undermine the very mission of the Church this Guild seeks to further - evangelisation and the salvation of souls. Grave concerns continue to be raised over various statements and actions from Rome - and other important Sees - which are so numerous to mention, that it is perhaps not worth mentioning them again. Yesterday's newspapers are yesterday's rubbish, and all that rubbish adds up to a heap of landfill.

However, as a concerned Catholic blogger, one of a number, I cannot help but echo St John, author of the Book of the Apocalypse when I look upon what is going on within the Church and exclaim, '...and when I saw her, I was completely mystified.' There is a very real danger of the Catholic Church, under the eyes of the Successor of St Peter and the Successors to the Apostles becoming one, not with Jesus Christ, but a world order set implacably against Him, which serves not Him, but the interests of the world, the self, the flesh and even, yes, the Devil himself. This is the very opposite of the Kingdom of God.

The Catholic Church is today becoming as known for what is not said by its Hierarchy as it is for what is said. From most Irish Bishops and from most US Bishops, the sudden and dramatic capitulation of those countries to the same-sex marriage agenda, which wilfully seeks to destroy the very meaning and foundation of marriage, has drawn little in terms of a robust individual response from some vital Catholic heartlands. Worse than that, though, Catholics can only look on in horror at the Synod on the Family to take place this year.

Issues settled long ago are raised from their tombs. The once unthinkable embracing of mortally sinful lifestyles is now high on the agenda in the corridors of the Vatican in a project already known as much for its deceit as its daring. Far more terrible than the world's attacks on the Church - attacks which Benedict XVI sustained with great honour and dignity, are the attacks within the Church which we cannot any longer call 'self-inflicted wounds' but attacks upon the Person of Jesus Christ Himself.

Others far more informed and eloquent than I have discussed the reasons why such theories as gradualism must be rejected by Catholics. We can certainly accuse ourselves before God for our laxity, our lack of self-restraint, our weakness and our sins, but we can never accuse God of failing to come to our aid, for not being generous with His Grace, for whoever asks is given. If we wilfully set ourselves against God's laws we cannot complain to God, neither can we complain to the Church, that to keep God's law is too difficult or beyond us. When we examine ourselves, we can only blame ourselves. God is rich in mercy, it is so true - and cannot be repeated enough - but God is also just, holy and pure. For the Catholic Church to fall deafeningly silent in the face of evil engulfing the World - whether that be the perhaps unprecedented persecution of Christians around the World - or the equally unprecedented destruction of human life in the womb, towards the end of life and the rampant and wholesale re-definition of marriage along the lines of sexual orientation - is, for Catholics faithful to the Church's Magisterium, a pain almost too much to bear. To watch this happen is to be like Our Lady and St John, watching Jesus be crucified, watching as the torrents of the world's sin washes over Him until He dies. It is precisely that - it is an agony for every priest and religious who loves Jesus and for every lay person who loves the Lord, but who know they can never love Him enough, never as He truly deserves.

For the Catholic Church to consider - to even think of - tying the Most Holy Eucharist - which we believe and are taught is the true Body and Blood of Jesus Christ, Son of Mary and Eternal Son of the Almighty Father - to a new 'pastoral' approach to sin that dispenses almost entirely with the sinner's need for repentance is an astonishing attack on the Body of Christ in the Sacrament of the Altar and the Body of Christ which is His Mystical Body, the Church.

For those who are enemies of the Church, these times are times of glee and celebration. For confused, lost, wandering souls who are seeking the truth, these are times in which the Church fails to point out the road to Eternal Life which must mean for those who seek it the imitation of Christ in taking up our Cross and following Him. So many people are so damaged and broken and long for Jesus yet they may not yet know it or realise that it is a relationship with Him that they truly desire. How much people long for the tender arms of the Immaculate Mother, who is so gentle, kind and patient towards those who know they need a Saviour and who is so happy to lead the lost soul to the merciful arms of her adorable Son. How many souls long to know that God is truly a Father, just, but faithful, loving and loyal, boundless in His compassion.

We must all pray very fervently for the Salvation of the World, for the conversion of sinners, even more so now than before, because the message of repentance, the message of Salvation is not easily heard by the men and women of today. With so much influence, in some cases, so much popular coverage in the media, the Church is failing to communicate that only a relationship with the Father, through the Son, in the power and unity of the Holy Spirit can satisfy the human heart. We cannot have happiness and embrace sin. We cannot have peace if we oppose God. We cannot overturn His laws, His commandments and remain in His love. We cannot embrace rebellion against our Creator without reaping what we have sown, the terrible retribution which we have stored up for ourselves by our own choices.

As Catholic bloggers, and as faithful Catholics, - those who believe the Gospel and do not reject the inner power of it - we cannot give into hatred of anybody, but also we cannot simply be spectators at the Crucifixion. We cannot merely watch while the Catholic Church become a woman that leaves completely mystified not just believers, but non-believers as well. We cannot but speak out if Catholic prelates propose that the Church becomes so complicit in the sins of its members by offering such profane solutions that it becomes 'a Mother of all the prostitutes and of all the filthy practices of the earth.' We must do what we can, by word, by deed, by example, to show forth Christ. The Church can preach a 'social gospel' and bring nobody to a relationship with the Lord. The Church can preach a gospel of 'ecological conversion' and insodoing, bring nobody to the Lord. The Church can preach a gospel of 'tolerance and dialogue' and yet bring nobody to the Lord Jesus.

Those with great influence and with great prestige within the Holy Church can, if they choose, ignore Jesus Christ's message as well as His warnings. They can even ignore the warnings of His Blessed Mother. For us, whether it brings us pain and tribulation, suffering, poverty, prison or hardship, silence is not an option. Being a Christian today may not be easy. It may not be as difficult as it was in the first century, but 'riding the beast' is - for those who dare to call God, Our Father, while it may look like the comfortable, convenient thing to do, a journey into the misery, not happiness, in this life and infernal Abyss in the next. Seek the Lord while there is still time. Do not give up the Holy Faith which has been handed down to you, even if an angel should preach to you some other Gospel. Pray for the Pope, pray for the Cardinals and Bishops, pray for the clergy and pray for the people of God. Be sober, be vigilant because your enemy, the Devil, prowls around seeking those whom he may devour. Whatever it costs us, let us follow Jesus to the end.