A Bit on a Progressive Prelate Advancing an Aura of "Avanti" 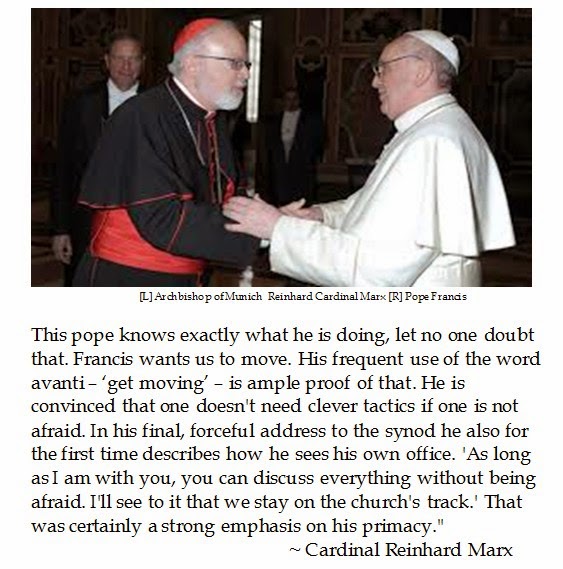 Cardinal Reinhard Marx is a progressive prelate who was an outspoken advocate for change at the Synod of the Family.  German bishops have been motivated to usher in a change for divorced Catholics who have been civilly remarried to have access to the sacraments.

Synod Fathers were visibly upset at the midterm relatio, which highlighted hot-button issues like homosexuality and remarried Catholics but did not seem to reflect Catholic doctrine or the overall discussions.

To remedy this anomaly, Pope Francis consented to having the Synod vote on each paragraph and publish the results.  In an interview with Die Zeit, Cardinal Marx insisted that including these pieces opened the door and should not be seen as a setback, even though they did not receive the required  2/3rds majority.

One wonders if Cardinal Marx's insistence of the inevitability of change is an aura of "avanti".

It remains to be seen how deliberations on hot button Synod on the Family hot button issues are resolved.  But it seems from afar that those motivated to usher in change are using the Synod of the Media approach, which plays upon secular sentiments to create an aura of inevitability.