Priests as Instruments of Grace 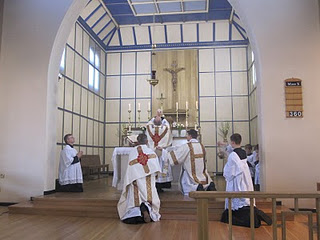 Fr Daniel Seward, of the Oxford Oratory, preached a wonderful sermon on the priesthood last Sunday, following the ordination of Fr Nicholas Edmonds-Smith on Saturday 1st October. He reflected on the role of priests as servants and instruments of God, and commented that a vocation to the priesthood is not found by demonstrating certain abilities, as though anyone were properly ‘qualified’ to act as Christ himself. It is all done by the grace of God. This is clear when one reflects on the liturgy, and how the priest must submit himself entirely and faithfully to it, with no room for imposing his own personality on what God has instituted in the Holy Mass:

‘We should not come away from Mass conscious of the personality of the priest who celebrates, rather, it is the person of Christ in whose person the priest acts that is the only important factor. This is why, as Pope Benedict says, there is no room whatever for creativity in the liturgy. Every word, every gesture, should come from the Roman Missal.’

I had already been reflecting on this following my visit to Blackfen for the 1st October meeting of the Guild of Blessed Titus Brandsma. It was my first experience of High Mass in the Old Rite, and I was very struck by the beauty of the vestments worn by the celebrants. For those who do not understand that the priest is Alter Christus, it might seem that these splendid robes are an arrogant affectation, a sign that the priest considers himself somehow more holy or more spiritual than the laity. But of course, the more splendid the robes, the less focus there is on the priest as personality, and the more clear is his role as an instrument of Divine Grace. And this is especially true when one is looking at his back!

This applies to the Sacrament of Confession as well. It is so helpful not to be able to see the priest. At the Oxford Oratory there is a screen, and a crucifix to look at as one kneels to make confession. All of this reminds one that the priest is acting as an instrument of Grace, a channel which God has chosen.

It seems to me that in these times when so few people have any real understanding of the sacred, it is more important than ever for priests to take every opportunity to show to the faithful the fullness of the truth about what ordination means, especially by their administration of the Sacraments. Ordination is an astonishing work of God, whereby he demonstrates that he can take useless human materials and transfigure them, so that they can do infinite good.

And of course it is also possible for priests to do infinite harm, which is why we so urgently need to pray for holy priests. Fr Daniel quoted Therese of Lisieux: "Alas! how many bad priests there are, priests who are not holy enough...Let us pray, let us suffer for them." He also mentioned the comment of St John Bosco, that the walls of hell are lined with birettas.

But in many ways this infinite capacity and great responsibility applies to every one of us. When we make ourselves into a living sacrifice, offering everything up through the Immaculate Heart of Mary and united with the Holy Sacrifice of the Mass, then we too become channels of God’s grace, mysteriously participating in the divine plan of redemption. When we submit to God’s plan by praying the devotions given to us by the Church, and particularly by Our Blessed Mother, and by receiving the Sacraments instituted by Christ, then we too can leave behind our personalities, instead becoming the person that God made us to be.
Posted by Anthony Radice (A Tiny Son of Mary).
The full text of Fr Daniel's sermon can be found here.
Photo by Mac McLernon (see her Flickr site).
Posted by Anthony Radice