Exorcist dies for the faith! 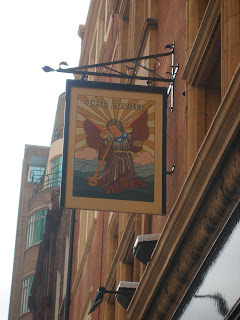 The Angel St Giles High Street, aka 'The Resurrection Gate' - next stop Tyburn!
The Reformation period produced many great men and women who suffered for the faith. It was a time when the ‘recrudescence of evil’ was manifest throughout the country and beyond and it remains a mystery that so many young men courageously stepped forward to undergo seminary training in preparation for the priesthood, knowing that they were committing themselves to an almost certain death.
One such was Father Robert Dibdale*, brought up in the English heartland of Warwickshire, went to and was ordained  in Rheims Cathedral on March 31st 1584.
Five months later he set sail for the English Mission and, in the course of the next two years he became a skilled exorcist; a calling much in demand at the time.
Here is a brief account of his all too short ministry.
“….at Sir George Peckham’s, Denham, near Uxbridge, and other places, by the virtue and power that Christ has bequeathed to the ministers of His Church, the martyr showed his mastery over evil spirits.
They were forced to leave the bodies of the possessed, and to bring from their mouths pieces of metal and other things which could never have entered a human body.
In obedience to the prayers and exorcisms of the Church, they declared, to their own confusion, the virtue of the sign of the cross, holy water and relics, both of the ancient saints and of those suffering in in those days for the Catholic faith.
These manifestations were slighted indeed by some incredulous and hard-hearted heretics; yet others who were not so prejudiced by passion, but more reasonable, were convinced by what they saw, and thereupon renounced their errors.
Father Dibdale was condemned to die for his priestly character with BB. Lowe and Adams, driven to Tyburn and there hanged, drawn and quartered, October 8, 1586”
*also listed as Richard Dibdale (Debdale)
Blessed Robert Dibdale, John Adams and John Lowe
ORA PRO NOBIS!
Posted by Richard Collins - Linen on the Hedgerow﻿
Posted by Guild of Blessed Titus Brandsma