The Martyr Priest Who Points Us to Mary 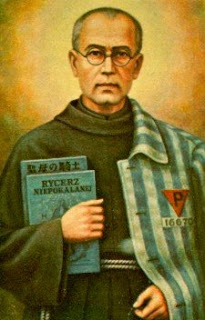 When I heard the story of St Maximiliam Mary Kolbe’s sacrifice in Auschwitz, I knew I had heard it somewhere before. But when I heard it the first time, there had been something vital missing, something which St Maximilian would never want to be left out: the centrality of his devotion to Our Blessed Mother Mary.

I remembered how I had heard the story of a Polish priest who had sacrificed his life for another man when I had first attended, then helped to teach on Alpha Courses. I had been deeply moved and impressed by the story of course, but had never taken the trouble to investigate more deeply who this amazing man was, and how he obtained his astonishing faith. As the story is told on the Alpha Course, we hear that the priest led the inmates of the starvation bunker in prayers and hymns. But we don’t hear that central to those devotions were hymns and prayers to Our Blessed Mother Mary.

Mary Immaculate was helping and sustaining St Maximilian at the time of his final trial. To omit this is to omit the central plank of St Maximilian’s faith, stretching all the way back to his childhood, when Our Lady appeared to him and offered him two crowns, a white crown of purity and a red crown of martyrdom. He chose both.