The Feast of the Exaltation of the Holy Cross: "And I, if I be lifted up from the earth, will draw all things to myself." 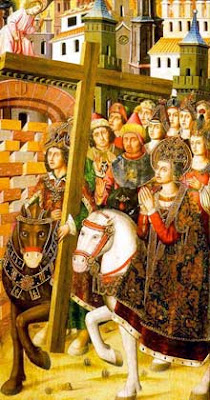 Today is the feast of the Exaltation of the Holy Cross, which the Church has kept since soon after St Helena, Empress and mother of Constantine the Great, found the relic of the true Cross in the early 4th century. To celebrate one of the most important as well as one of the most ancient of Christendom's feasts, which sees both East and West united on this date, I thought it might be good to republish today's meditation from The Saint Andrew's Daily Missal (published 1945). I think these few words capture something of the essence of what this glorious feast is about.


On September 14 , in 335, took place the dedication of Constantine’s basilica, which enclosed both Calvary and the Holy Sepulchre. “At this date,” says Ethelria [also known as Egeria, who wrote her Pilgrimage to the Holy Lands at the end of the 4th century], “the holy Cross was discovered. And the anniversary is celebrated with as much solemnity as Easter or the Epiphany.” Such was the origin of the feast of the Exaltation of the Cross. [Other sources differentiate between the dedication of the Church of the Holy Sepulchre and St Helena's discovery of the true Cross, also on this date, in AD 326]

“When I shall be raised on high, I shall draw everything unto Me,” Jesus had said [cf Jn 12:32]. It is because the Saviour had humbled Himself, being obedient even to the death of the cross, that God exalted Him and gave Him a name above all other names [cf Phil 2:9]. Wherefore we must glory in the Cross of Jesus, for He is our life and salvation [cf Gal 6:14] and He protects His servants from the wiles of their enemies [cf today’s Communion antiphon: Per signum Crucis de inimicis nostris libera nos, Deus noster].

Towards the end of the reign of Phocas, Chosroes, King of Persia … took Jerusalem [AD 614], where he put to death several thousand Christians and carried off to Persia the Cross of our Lord Jesus Christ, which St Helena had placed on mount Calvary.

Heraclius, the successor of Phocas, has recourse to many fasts and prayers, imploring with great fervour the help of God. He assembled an army and defeated Chosroes [AD 628]. He then insisted on the restitution of the Cross of the Lord. Thus the precious relic was recovered after an interval of fourteen years. On his return to Jerusalem, Heraclius carried it on his shoulders in great pomp to the mountain where the Saviour Himself had borne it (AD 629).

An extraordinary miracle marked the occasion. Heraclius, who was loaded with ornaments of gold and precious stones, was held back by an invincible force at the entrance gate of mount Calvary and vain were his attempts to enter.

As the Emperor and all those who witnessed the scene were astonished, Zacharias, bishop of Jerusalem, said to him: “Consider, O Emperor, that with these triumphal ornaments you are far from imitating the poverty of Jesus Christ and His humility in bearing His cross.” Heraclius thereupon doffed his splendid garb and walked barefooted with a common cloak on his shoulders to Calvary, where he again deposited the cross. The feast of the Exaltation of the Holy Cross on the original spot, the anniversary of which was celebrated on this day, became of great importance.

Let us join, in spirit, the faithful who in the Church of the Holy Cross in Rome venerate on this day the relics of the sacred wood exposed for the occasion, so that, having been privileged to adore it on this feast when we rejoice for its exaltation, we may likewise possess for all eternity the salvation and glory the Cross has won for us.

Collect for the Feast of the Exaltation of the Holy Cross: -


O God, who year by year, dost gladden us by
the feast of the Exultation of the Holy Cross:
we beseech Thee, grant unto us, who on earth have known its mystery,
to be found worthy to enjoy the rewards of its redemption in heaven.
Through the same Jesus Christ, Thy Son,
who liveth and reigneth with Thee in the unity of the Holy Ghost, God,
world without end. Amen.