Well, as if the Pontifical Commission 'Ecclesia Dei' clarification of Summorum Pontificum wasn't enough to have burst the balloons of liberals who thought they might yet have gained a restriction of the celebration of the Latin Mass, the Holy Father last week preached on that most illiberal of human gestures. Kneeling! The video above expands upon Pope Benedict XVI's personal reflections on the centuries old tradition of kneeling in order to worship, adore, praise and ask forgiveness from, Almighty God. This is, of course, an outward gesture that runs like a thread through the Tridentine Mass, during prayers at the foot of the Altar, the Sanctus and most notably during Holy Communion. Is it any wonder that the Holy Father has given us Summorum Pontificum and now sealed it with Universae Ecclesiae?

Ever since Moses heard the Voice of God upon discovering the burning bush and decided to skip on kneeling, opting for the straight flat on the face look, the lives of those who have encountered the All Holy One have produced radically humble human gestures in worship and prayer. As I mentioned in an earlier post, the encounter with the Risen Christ is what the Holy Father desires for us all and all of his liturgical announcements point towards fostering a liturgy that creates the reverential, prayerful atmosphere for this encounter to take place.

This theme, taken up in the Cardinal Ratzinger book, The Spirit of the Liturgy, is, it is clear, a theme close to the heart of the Holy Father. I expect that His Holiness has written much far more on it than I have personally read, but given that I have His Holiness's thoughts in front of me in the above-mentioned book, below is some more of his thought and it crossed my mind today at Mass. Many vivid illustrations of faith in the Gospels depict men and women kneeling down before the Lord, but Cardinal Ratzinger draws upon Phillipians 2:6-11.

'In this pre-Pauline hymn, we hear and see the prayer of the apostolic Church and can discern within it her confession of faith in Christ.  However, we also hear the voice of the Apostle, who enters into this prayer and hands it on to us, and , ultimately, we perceive here both the profound inner unity of the Old and New Testaments and the cosmic breadth of Christian faith.  The first hymn presents Christ as the antitype of the First Adam.  While the latter high-handedly grasped at likeness to God, Christ does not count equality with God, which is by nature, "a thing to be grasped", but humbles himself unto death, even death on a Cross.  It is precisely this humility, which comes from love, that is the truly divine reality and procures for him the "name that is above every name, that at the name of Jesus every knee should bow, in heaven and on earth and under the earth" (Phil 2:5-10).'

'Equality' seems to be the great buzzword of our times, perhaps a new religion of our times. Ultimately, however, if we fail to kneel in the Presence of God, especially when we receive Holy Communion, we are outwardly saying that we are not really in that Presence. What we do on the outside does lend to what we believe on the inside and it really amounts to a denial of the reality of the situation. Even if we were to fail to kneel, yet still believe in the Real Presence, it would still be bad for us, because we would give the impression to others that we do not believe it is the Lord and so we weaken the faith of others. More than this, the Holy Father knows that our denial of this reality before God is far more harmful to us than it is to God, precisely because it concerns disposition of the inner person, as well as the outer person.

For how can we be truly grateful for Who we have received, if we are not aware of Who He Is? If we greet Him as we would a stranger at a dinner party, then do we know Him who is both Truth and Love? Or even if we allow for the theology of the eucharistic meal, is the Lord of Lords just another 'guest'? No. He is the Host, in two sense of the word. He is like us in that He is a Man, yet He is Other because He is God, without sin, Goodness itself. Are we greeting Him as if we are equal to Him? Just 'two of a kind'? Is that not in any way blasphemous?

It strikes me that the reality of Faith is nothing to do with us, but everything to do with God. What we do, our response, is really our response to a Gift that we cannot truly comprehend. Yet, so it is, that we seek to devote ourselves more to Christ and His Church out of an increase, however small, in our awareness of the greatness of that gift. It strikes me that that is where vocations arise - men sense a calling to the Priesthood or religious life out of an increased awareness and profound inner appreciation of the great gift of the Eucharistic Lord, not because of the greatness of the gift, for the gift will always be greater than we can fathom this side of Heaven, but because of an increasing awareness of that truly mysterious gift, will young men and women consecrate their lives wholly to Christ.

That is why the Holy Father is encouraging us to kneel. Not because God is furiously outraged that we do not (though we cannot rule out that kittens do not die because of our refusal to kneel), but because we injure our own souls if we do not respond to God as creatures created by Him, for Him who find no rest outside of Him. The Lord is our Best Friend, but we know it best when we realise that it is He who rescues us from all of our foes and redeems us because He is our Saviour, Redeemer and our God. God created us to worship Him. How can we worship Him if we do not understand that, in Jesus, He is truly God as well as truly Man? One thing is for sure. If we believe, and show by our actions, that we our His equals, then what can He do for us? How can we possibly say that we know Him? Cardinal Ratzinger continues, in The Spirit of the Liturgy...

'The man who learns to believe learns also to kneel, and a faith or a liturgy no longer familiar with kneeling would be sick at the core.  Where it has been lost, kneeling must be rediscovered, so that, in our prayer, we remain in fellowship with the apostles and martyrs, in fellowship with the whole cosmos, indeed in union with Jesus Christ Himself.'

It is important to remember that Our Lord Himself, the Lord who 'humbled himself even to death upon a Cross' will have often knelt to pray and in Gethsemene prostrated Himself before His Heavenly Father. We are not asked to prostrate ourselves in like manner, unless we are called to be ordained. Kneeling, however, is another matter and if it is good enough for the Son of God Himself, then surely, surely it is good enough for us. 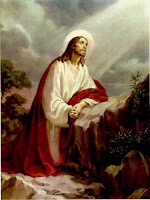 Liberals do much damage and have done much damage to the Faith of others, as well as themselves, when they outwardly deny what the Church and they themselves openly proclaim with their mouths in Mass, in the Creed. I have certainly been guilty of it myself at times, also, but it is clear that the Holy Father sees the practice of kneeling as a definitive aspect of Christian culture precisely because it builds up and it proclaims faith, hope and love in ourselves and in others and we may be surprised to learn that a 'small thing' like kneeling can make a big difference.

As if to drive the point home, Cardinal Ratzinger then slips in a story that comes from the sayings of the Desert Fathers according to which...

'The devil was compelled by God to show himself to a certain Abba Apollo. He looked black and ugly, with frighteningly thin limbs, but, most strikingly, he had no knees.  The inability to kneel is seen as the very essence of the diabolical.'

In The City of God, St Augustine ponders over the length of time which the Last Judgment shall last and lets the question go since it is unknowable, but we, we who know that that Event will one day take place, should get used to kneeling before the Lord now, sooner, rather than later. Just as we know not when the Lord shall come, for it could be minutes, days, months, years or thousands of years, so we do not know the duration of the Last Judgment. It could be minutes, days, months, years or....regardless...let's get used to kneeling now!