The Sistine Chapel - in the depths of Wales! 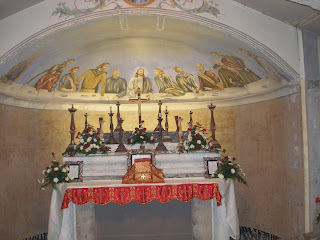 Beautiful frescoes adorn the walls and ceiling, stone communion rails define the sanctuary, marble pillars line the sides of the chapel and a fine array of brass candlesticks furnish the altar.
All is still, all is quiet but all is not real. In fact it is all false or, to use the language of the art world it is all “faux”. 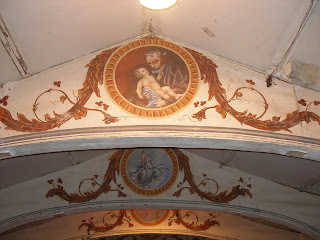 This chapel is set in what, from 1942 until 1945, was an Italian Prisoner of War camp. It is housed, in fact, in a rusting and ancient Nissan hut, surrounded by others of the same kind that once housed up to 1,000 prisoners far from their Tuscan, Umbrian and Calabrian homes and far from their loved ones.
Most of these men were Catholics and many of them had the innate Italian sense of art and sacred art especially. Once a hut had been assigned to them as a chapel they set about creating a real chapel such as they might have worshipped in at home. 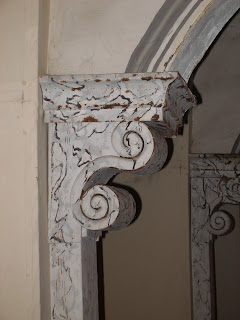 Paper was pulped into papiere mache and moulded into columns that were then painted and marbling introduced with the aid of a large feather, corned beef cans were saved and cleaned before being hammered out flat and then fashioned into ‘flat’ candlesticks, painted yellow for a brass effect and given a strut at the back, from three feet away you would swear you were looking at antique brass candle holders.
Concrete was poured into crude moulds and, before setting completely was released and then ‘distressed’ so that it looked like 17th century carved stonework. These were the altar rails.
Then, these resourceful men saved up and harvested whatever vegetable and vegetation scraps they could find and made dyes of all shades. These were to be the paints used on the plasterwork of the ceiling and walls; the masterpiece being the fresco of The Last Supper above the altar. 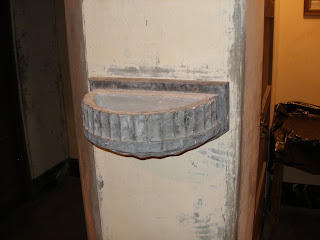 All of this was carried out with love and concern for what was to take place in this very humble hut. It was accomplished to the glory of God and their reward was the Mass in Latin as if they were back home with wives, sweethearts and parents.
Today, the chapel still stands on the site of the original camp in the small Ceredigionshire of ; a mile or two outside the market town of Emlyn. Time and the Welsh elements are taking their toll. The owner of the site has done his best to preserve what is there but, slowly rust is taking hold and damp is penetrating the plaster. The hut is now shrouded in plastic sheeting to keep out the worst of the weather but, unless urgent steps are taken this splendid piece of Catholic history will crumble into oblivion.
What can be done? In the organisation for the preservation of historic buildings is called Cadw but it would be fruitless to pour cash into restoring the chapel in its present location, it is just too isolated.
I would like to see the at St Fagan’s near , in conjunction with Cadw, take this chapel on board and, in their normal fashion, remove it in sections and re-build it on what is one of the best museum sites in . It would not cost much (compared with some of the relocations St Fagan’s has tackled). But it does require the will to make it happen.
Posted by Richard Collins of Linen on the Hedgerow.
Posted by Guild of Blessed Titus Brandsma