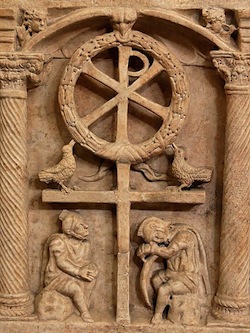 Diocletian retired and left his empire's laws against the Catholics on the books. In fact, after he abdicated on May 1, 305, some of the provinces saw less persecution. However, in the eastern one, under Galerius and Maximian, the horrors of torture and death continued until 313, with some persecutions happening even after the Edict of Milan Edictum Mediolanense. Maximian hated the Catholics particularly.

But, the persecution did end, only to be taken up again later by others. Here is a section of the Edict.


When you see that this has been granted to [Christians] by us, your Worship will know that we have also conceded to other religions the right of open and free observance of their worship for the sake of the peace of our times, that each one may have the free opportunity to worship as he pleases; this regulation is made that we may not seem to detract from any dignity of any religion.
—"Edict of Milan", Lactantius, On the Deaths of the Persecutors (De Mortibus Persecutorum), ch. 48. opera, ed. 0. F. Fritzsche, II, p 288 sq. (Bibl Patr. Ecc. Lat.XI).[8]

But, for those of us on this side of the persecution, that is, those of us who are watching the ratcheting up of forces being put into place to either make Catholics scapegoats, or merely to constrict them severely, the coming days of fines, imprisonment and even death are yet to come.

We have time to prepare in four areas:

1) Find that truth in ourselves, that cell with God to know what it is he wants you to do and where to go. If you are married with children, this means praying about the entire family. Fathers need to take the lead in these discernments and actions.

2) We have time to seek the perfection of the virtues necessary for the evil times. There will be many suicides and apostates. We must be in a good place spiritually ourselves, not to be tempted to despair, and to be able to help others.

3) This is the last call for building communities. Travel will be restricted or very expensive. Movements will not be free.

4) Children must be prepared to be little soldiers for Christ. Parents need to pray how this is to be done. Children are called to be saints as well as adults.

Time to grow up and think and live like Catholics.