Notes on the Shadow Synod (Part 4)

After Professor Doctor Eberhard Schokenhoff from Freiburg im Breisgau, who incidentally is a Catholic Priest, came Abbé Prof. Dr. François-Xavier Amherdt from Fribourg in Switzerland (which was my Alma Mater and used to be known as the Rome of the North with its hundreds of seminarians – sadly rather different these days I have been told). The title was the same as Father Schokenhoff's: "Sexuality as expression of love. Reflections on the the theology of Love".

I found it difficult to find much theology. Indeed he starts by saying that we need to look at Love, Sexuality and Marriage in the light of a personalist sexuality, marking the dimensions of the person (!??), and looking at anthropology, sociology, psychology of the depths and human sciences. That will be the first part of his talk. In the second part having defined the first part as 'theology' he will ask how such can be differentiated from those in a sexual relationship which is not sacramental marriage in the perspective of a law of graduality referring the reader to Evangelium Gaudium Note 44. I think that must be a reference to paragraph 44 of Evangelii Gaudium which itself has a note referring to John Paul II, Post-Synodal Apostolic Exhortation Familiaris Consortio (22 November 1981), 34. This then takes us back to Saint John Paul II's careful distinction between the law of graduality and the graduality of the law – a distinction overlooked both here and in the Synod documents.

His first part gives a christian view on sexuality as an expression of love i.e. marriage. What he says is all good stuff mentioning such matters as chastity (hardly mentioned in the Synod documents). But then in the second part he deals with 'values in relationships and unions outside of marriage'. He talks of "logoi spermatikoi" or seeds of the spirit which can be found in these.

This is an idea which has got imported into the Instrumentum Laboris 2015 and has been obviously lifted from this talk. He then goes on to say in certain cases it is merely 'that these couples [in concubinage as for instance trial marriages] have only done over a period of many months or years what preceding generations did in a day'. 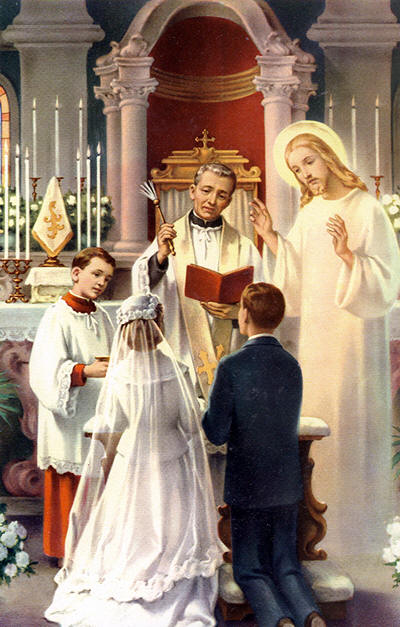 What he means is that in a sacramental marriage the marriage service and consummation normally happen on the same day whilst in irregular arrangements these two things can be separated by months or years. So that's okay. This really must take the biscuit for the daftest statement I have yet come across as it completely overlooks the point that the marriage service preceded consummation on the same day in previous generations; i.e you do not put the cart before the horse as in an irregular situation supposing the horse actually exists or ever arrives! For Abbe Amherdt though this is an example of graduation.

He then points to what he calls the values of a civil marriage which can indicate permanence and openness to procreation. He lists the values which he says can exist in cohabitation of which one is that a long length of time indicates a greater indication of permanence! He seems to have a very rosy idea of the values such couples might have and I suspect the reality is very different. One of the principal 'values' I would have thought is sex without commitment coupled with frequent deception of one party by another.

However he thinks they have the intention to marry in the end and to be open to procreation so a pastor can gradually persuade them along that path. He says how a pastor could show the couple the advantages of being married sacramentally including a wedding feast. He finishes by emphasisng the importance of the Eucharist in all this but it is a thoroughly ambiguous final paragraph as it does not explain under what conditions communion can be received.

The problem with all this is that if you say there are values in cohabitating etc then people will regard such as not sinful and merely a second best in the eyes of the Church with which they will be quite happy in order to eschew the commitment of marriage.
Posted by Nicolas Bellord