Catholics who believe, uphold and who strive to live the Church's timeless teachings - followers of Jesus Christ - feel at once undervalued and overwhelmed by the direction the Church appears to be taking at the current time. As members of The Guild of Blessed Titus Brandsma, all Catholic bloggers who have joined made known their commitment to the Magisterium of the Church, the Church's infallible teachings. Little did we know when we established this online blogging community devoted to the New Evangelisation, that the Magisterium would come under such grave threats as it does in the current day from within.

Defender of the Faith at the Synod on the Family


It is no surprise therefore that so many Catholics who feel confused and pained by events in Rome during, for instance, the Synod on the Family last year, look forward with trepidation to the Synod's conclusions this year in October. Public and prominent critics of both the manipulation that took place at the Synod and of the ambiguous language contained within the Synod's chief documents look for members of the Hierarchy to speak clearly of Jesus Christ and His saving truth. There are a number who have spoken out publicly in defence of Christ's own teachings on marriage and the family, but they are not a great many.

Step forward, then, the man who emerged at the Synod as the leader of those voicing utmost concern at the concerning scenes that took place last year, Cardinal Raymond Burke. Cardinal Burke already had numerous enemies on the outside, and has made several enemies in high places in the Church, but to meet Cardinal Raymond Leo Burke you would never know that he was under any kind of strain. If this man has the weight of the crisis in the Church on his shoulders, he does not let that show. His charisma, if we can call it charisma, is quiet, prayerful, reflective but the difference between him and many of his brother bishops and cardinals appears like night and day. It was a great honour, as Chairman of The Guild of Blessed Titus Brandsma, to be present at a wonderful talk given by Cardinal Burke in Chester and to be present at a Low Mass in the Extraordinary Form at the magnificent 'Dome of Home', Sts Peter, Paul and Philomena in New Brighton.

"These aren't my own thoughts."


Most commentators saw the Cardinal's move from the highest court in the Vatican to a new titular role as Patron of the Order of the Knights of Malta as a 'demotion' at the hands of Pope Francis yet, for now, Cardinal Burke enjoys a certain freedom that makes his ability to travel and to give a trustworthy Shepherd's support to Catholics in a time of great confusion within the Church a source of great joy to those whose spirits feel decidedly crushed. His sidelining from the heart of Vatican life mirrors quite poignantly, quite perfectly the feelings of onlooking Catholics who feel their voice - the voice of fidelity to the Church's teachings - is neither welcomed nor adequately heard.

It is clear that Cardinal Burke, in a time described by Bishop Athansius Schneider as the 'fourth great crisis of the Church', has decided to stand resolutely for Jesus Christ and His Teachings in an age in which so many prelates in the Church are making moves that signal a move away from proclaiming the truth, under the mantra of 'mercy', making that truth harder and harder to hear and to discover afresh as if Catholic truth was a toxic substance harmful to the Church's children. It is clear, likewise, that this Cardinal will say what he believes must be said in defence of the truth about human sexuality, life and marriage, as well as the Sacraments, come what may.

While some prelates win popularity simply by virtue of their personality or their ability to work a crowd, Cardinal Raymond Burke has won a place in the heart of Catholics by radically different means. If you wanted to sum up Cardinal Raymond Burke's approach to the Faith, it could well be found in a response he gave after his talk in Chester in which he told someone who appeared critical of a 'closed-mindedness' about His Eminence's talk. His reply was, "these aren't my own thoughts". Indeed, Cardinal Burke's strength is in his ability to state the truth stated by Popes, Saints and Fathers of the Church without presenting his own personality and personal opinions. In these days, everyone in the Church has an opinion, but not everybody has a deep love for the truth.


And it is the truth of Jesus Christ that is at the heart of Cardinal Burke's themes. It is the truth that the Cardinal, politely, but firmly, places as a lamp on a lampstand, rather than hidden away as so many prefer it. These are challenging doctrines, 'hard teachings' that place us on the narrow way, on welcoming every human life, being open to life, on the permanence, indissolubility and exclusivity of marriage, on the evils of abortion, artificial contraception, homosexual unions and divorce. These are matters which, when raised, bring certain condemnation from people now within but always without the Church, yet as the Cardinal said, "these are not my own thoughts". This is the truth of Christ our Lord. The Cardinal is refreshing because grace and truth are refreshing and always attractive. At at time when the ground beneath faithful Catholics feels like it is shifting on sand, the rock-like solidity and clarity of Cardinal Burke's doctrinal positions and clear, unambiguous statements, as well as courageous fidelity to the liturgical tradition of the Church have become a great consolation to clergy and laity alike. It is no wonder, then, that so many turned up to hear him speak, to meet him, to pray at Mass celebrated by him and to thank him. 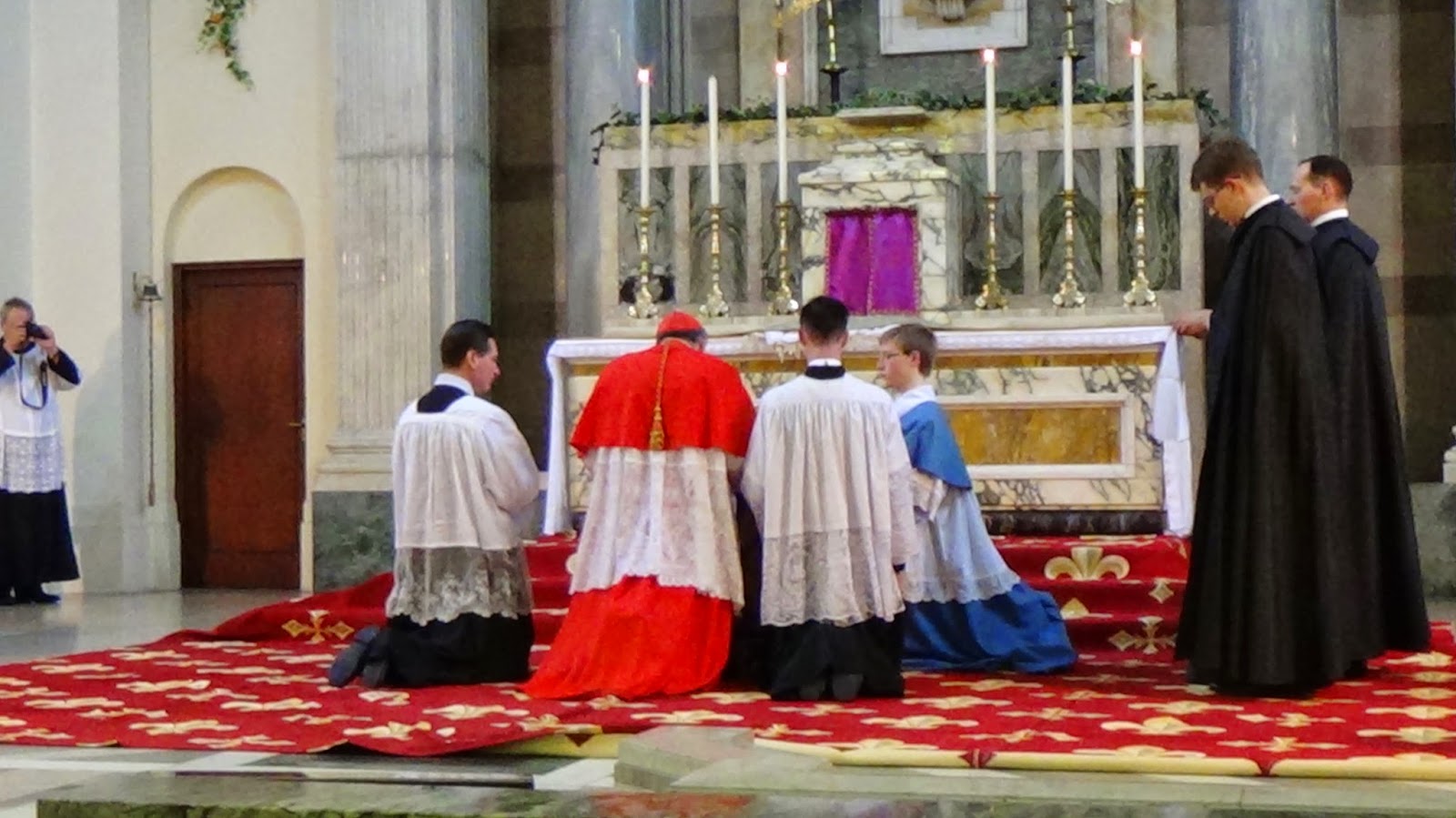 Like the happy scenes that welcomed Bishop Athanasius Schneider during his visit to the United Kingdom, Cardinal Burke received great applause after his talk on 'remaining in the truth of Christ on marriage', a talk given at Double Tree Hilton Hotel in Chester. The talk centred on the essays within the book of the same name which has since become known for its causing such controversy among the Synod's organisers, that it was intercepted as mail when it was delivered to the bishops present at the Extraordinary Synod on the Family in 2014.

And like Bishop Athanasius Schneider, Cardinal Raymond Burke has a fixed place in the heart of English Catholics not because he is a wonder-worker, nor because he promises a new era that helps us to feel more comfortable in our lukewarmness, nor because he promises a revolutionary attitude to doctrines. He isn't preaching a new doctrine. His popularity has grown among Catholics because he is brave, virtuous, polite, courteous, prayerful, exudes a certain warmth and quiet holiness, respects God and man and simply re-states, often in the words of others, that which has been said before. It cannot be said enough, nor too often, how much we Catholics need and appreciate that in these dire times.


The Dome of Home from Philip Chidell on Vimeo.

Like the beacon of hope that is the Dome of Home that welcomed sea-farers back to the Wirral Peninsula from rough seas, Cardinal Raymond Burke shines the lamp of Catholic truth for those who are seeking the truth, at a time when that light seems to grow dimmer. No grand gestures, no kissing, no hugging, no spin, no PR, just a love for truth and a quiet holiness and great clarity of mind, yet, for these simple qualities, and to the Voice of the Family and the SPUC who made these wonderful talks possible, many Catholics today thank Almighty God. Do as Cardinal Burke asked me to do for him and keep him in your prayers.


More photographs, taken by and copyright of Philip Chidell, of Cardinal Raymond Burke's visit to New Brighton can be seen here.


Photographs of Solemn High Mass at St Augustine's Shrine in Ramsgate are here.  Read a priest's report of Ramsgate here.


Cardinal Burke's Chester talk can be read in full here.


A report on the SPUC Youth Conference, which was fully booked out can be read here.


A report on the meeting of Cardinal Burke with the Confraternity of Catholic Clergy can be read here.