Yesterday, I had a short discussion with a person from Malta who is now living in England. What struck me in our conversation was the universality of the Catholic Faith-that those of us who are truly Catholic cross boundaries daily in a world which is larger and more important than individual nations. That is the world of the universal Church. It is purposefully being hamstrung by the EU, however, as we shall see more clearly in the near future. 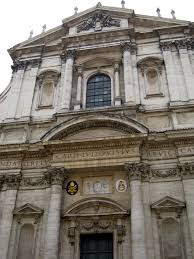 The one, holy, Catholic, apostolic Church is also universal. Christ called all to go out and make disciples of all nations. Years ago, someone I know and admire, told me that he converted from Anglicanism while on a holiday to Rome. He had an epiphany when he came out of a Catholic Mass, and realized how big and universal the Catholic Church was, as he stood in the street, Campo Martio, (in Latin), if I remember correctly, and marveled at the myriad types of people in the Mass, and in the street in Rome. The universal city is home to the universal Church. Then and there, he realized that the Anglican Church was, merely, national, and not universal. It was the Queen's Church, not one where the leader addressed the urbi et orbi. He realized in a flash that the Catholic Church, outside of the boundaries of all cultures, all nations, all times, and not a creation of history, but a creation of God, was the one, true Church of Christ.

But, the downside for so many Anglicans and other English, who are thinking of coming in, is that the Catholic Church is an immigrant Church. Some are uncomfortable with this. When one goes to Mass in Bayswater, for example, one's brothers and sisters in Christ are from several African nations, Viet Nam, the Philippines, Malta, Spain, France and Ireland. The beauty of the immigrant Church may be seen at the Oratory, or in Kensington. Only in the countryside may one experience an Anglo-Saxon congregation. But, look at the largest parish in the Diocese of Arundel and Brighton-a veritable celebration of diversity of cultures.

Part of the unhappiness of some English Catholics at this time is that they really do not want a new world Pope.

My ancestors were immigrants to America. They came from Luxembourg, Moravia, Bohemia. Within the first generation, they were in parishes with Germans, Irish, French, and Native Catholics. The melting pot of America met for Mass daily.

I find that being part of an immigrant Church is not only a reality and healthy, but positively holy. The Church reveals the coming eternal life in Heaven-a garden of thousands of different flowers, of all kinds of people from every corner of the world.

And yet, there are those who do not want an immigrant Church. They either want their own working class Church or their precious, elite Church. They want the Church to reflect their clique, whatever that is, and snobbery can be both from the white collar or the blue collar mold.

Class differences, as well as cultural differences, mar the Church in Great Britain still. This is a sign of worldliness, of false pride, of anger, resentment, even malice. The Oxbridge Catholic and the Scouser Catholics have more in common than other groups. They are all members of the Catholic Church which transcends such differences of education, background, or wealth. But, they have to desire to share a Catholic identity.

In America, the Catholics had to identify with being Catholic first, and immigrant from a particular culture second. To be a Catholic was the determining factor of person-hood in a WASP nation. This identity lasted until recently, with a strong Catholic culture which transcended differences of class and origin.

Sadly, too many English are still stuck in the differences, and not in the shared Catholic culture. Part of this is the fact that the Church was persecuted for so many long centuries, and the Catholic identity was purposefully destroyed in so many areas.

Part of it was that the Anglicans, in declaring themselves Catholic, undermined the true Catholic identity of the old recusant families which had to flee to the continent and even to America eventually. Many of those recusant families were part French, part Belgian. The medieval Church was continental, not merely identified with one nation.  In England, the sense of the universal was suppressed. To be English meant to conform. Nationalism pushed away the ideals of the universal Church. And, guess what? This is even more true, today. And, this is a tragic battle for the universal Catholic Church.  She can never be confined to being "national", and one reason why the strong nation states wanted to control Her, and still do, is that she threatens their hegemony.

It is time to reconnect with this universal Catholic identity. But, Catholics must desire this. Snobbery from both the upper and lower classes must stop. Identities which are based on hurt and hatred must stop.

I challenge the young families to rediscover a real Catholic identity, like the one before the Protestant Revolt.

I challenge Catholics to find out how to be a Catholic in the universal Church and not merely a parochial Catholic. Our pride is not in class, but in membership in the Church. Our pride is not in family, as that can be idolatry, but in being Catholic. Either we identify with being Catholic first, or we need to look at our priorities, as we are Catholic first, and all else second or third.

I challenge those stuck in identifying with a particular "class", or political party, to realize they are wrong, as their first identity is that of being a Catholic.

The medieval English knew what that meant. They were more urbane, more universal than the English now. I hope this can be re-discovered before all semblance of Catholic identity disappears from the Island. We shall only truly be united when we know and live who we are-Catholics.