As most of the world knows through the media, both America and Britain have experienced difficult even dangerous weather in the past week.

Some people have died of the cold or experienced damaged homes in the flooding.

In the States, there is another side effect of the polar vortex this week and that is "cabin fever". This term came into being right before WWI, when the lives of people in the West were changing rapidly because of phones, cars, machines and a new busyness. Life was becoming more complicated when this phrase appeared, as if a new social illness had been created by the new industrial culture.

Now, as a disclaimer, I never get cabin fever, which is a claustrophobia brought on by having to stay inside for days and days, because of dangerous weather conditions. I am a person who, as an extreme introvert and writer, love the time and distance from crowds, which being stuck in a house brings.

However, I have been around people today who just "had" to get out. The need may be for human contact other than those with whom one lives, or being in touch with nature.

A robin, a male and female cardinal, and some juncos were enjoying the warmer temperatures today; 18 below to 38 above is a huge jump in Fahrenheit. Where these birds had been earlier in the week during the Arctic storms, I do not know.

For days, the streets were almost empty of cars, as people were told to stay home. One's skin would freeze in ten minutes earlier this week.

Many people had to go shopping today after depleting goods during the two to five days of dangerous weather. Many people did not have access to phones or the Net, as the weather interfered with their electricity. Some became frustrated.

Today, many people went out to buy food, or simply relate to the larger community as they had cabin fever. I had to go shopping for some people, and the shops were full.

But, I think there is another reason for cabin fever, and that is the addiction to both mobility and activity.

One of the great blessing to me is just to have a place to stay--stability. One of the greatest blessings for me is silence and the ability to be alone with God, my Life and Love.

Instead of cabin fever, I desire cabin peace. I need the time to be rejuvenated, renewed, made more whole in order to go out into the world. 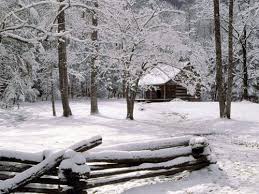 I am very grateful that the dangerous weather has broken, but I am sad that so many people feel the need for unnecessary activity instead of time for reflection, meditation, prayer, reading.

I would love a cabin of my own with lots of time for cabin peace. Let us try and cultivate what St. Catherine calls the little cell in our minds, where we can find God in the midst of noise and movement.

Maybe we can create a little cabin space, in our hearts, in our minds, where we can meet God.