In our times, it seems as if the New Age movements have co-opted the teaching on our Guardian Angels. The Church has had a consistent teaching on angels, based firstly on the Scriptures, both Old and New.

Angels dot the Bible landscape in various roles from warriors, messengers, to helpers and counselors. The three great angels, Michael, Gabriel and Raphael are all mentioned in the Old Testament, by role and by name. These angels appear in the New Testament as well, with Raphael being referred to in Tobit, as one of the seven angels who stands before the Lord, and noted in Revelations 8. I merely quote one verse here in this post.  Psalm 90:11: "For he hath given his angels charge over thee; to keep thee in all thy ways."

Our Guardian Angels have their own feast day this week, a Memorial on October 2nd, and are also found in the Scriptures. One may think that the angel which took Peter out of prison, for example, may have been his own.

But, the references abound and the theologians down through the ages have written about guardian angels, including St. Thomas Aquinas. who, when discussing the hierarchy of angels, puts our guardians at the lowest level of angels.

I think a review of what these angelic beings are really like may be necessary to clear up the fog created by New Age nonsense. I cover just a few points.

First of all, angels are spirit and not matter. That they take on human form, such as Raphael did in the Book of Tobit, is a miraculous event, most likely involving the angel appearing as human in order to aid humans. The dualists of our day want to make angels into material beings, which is not true. Many fantasy movies, books and games confuse youth on this aspect of angels, sadly. Some anime stories confuse spiritual beings with material ones, giving both demons and angels material aspects. The new game art confuses traditional aspects of angels on purpose, in my opinion, blending good with evil. 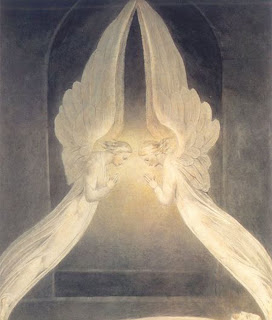 Second, they are extremely intelligent, more than we are. Their intellect informs our intellect, moves our senses, and inspires our imagination for good.

Third, some Fathers state that only the baptized have angels and some state that all men and women have angels. However, in the Catechism of the Catholic Church, it seems as only the baptized, that is Christians, have angels. Here is the quotation, using Basil as a reference. The fact that St. Thomas Aquinas states that all humans are given angels from birth lends weight to that argument and he quotes St. Jerome. Here is Jerome from a commentary on Matthew 8.

"The dignity of human souls is great, for each has an angel appointed to guard it."

I think the jury is out on this one. The CCC seems a bit confusing as the first sentence contradicts the second.

336 From its beginning until death, human life is surrounded by their watchful care and intercession.202 "Beside each believer stands an angel as protector and shepherd leading him to life."203 Already here on earth the Christian life shares by faith in the blessed company of angels and men united in God.

However, whether one gets an angel at birth or at baptism, the fact that God gives us a powerful aid in the fight against evil is a huge blessing. One should take time to thank both God and the guardian angel for this protection.

Four, children and baptized babies do not become angels at death, which I actually have heard people say in England. We are completely different creatures with a human soul. I would hope that this manner of speaking would pass away, if these statements are mere colloquialisms.

Five, angels stay with us all the time, but according to St. Thomas Aquinas, remove themselves for times for reasons known to God, such as times of trial.

Six, angels do not grieve, states Aquinas, (nor do the saints in heaven, by the way). They experience bliss constantly, even in serving us as guardians.

Seven, the angels do not have gender. They are not male and female, and the feminization of their features in art is a sad, relatively modern convention.