Whose Responsibility is Catholic Community?

Seminaries still perform the same function, providing intellectual, spiritual and pastoral formation for those discerning and preparing for priestly ministry. To those three areas of formation Blessed John Paul II added a fourth in his Apostolic Exhortation Pastores Dabo Vobis (PDV) - that of human formation. Of course human formation had always gone on in seminaries - living in community provides that to a significant extent, but PDV made it more explicit and hence gave it a greater focus.

But, apparently, a person told me today, that a fifth pillar of training, besides, intellectual, spiritual, pastoral and human formation is going to be added. This fifth area is community building.

I need to find out more about this with a written source. It seems that the problems of the lack of lay involvement in parishes has led to an idea that priests need to learn how to create parish communities. If this is true, this leads back to the older idea, way pre-Vatican II, and not the American experience on the prairies, that it is the priest's duty to create a parish community, making the priest the locus of all activity. 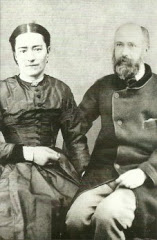 I firmly disagree with this emphasis, and have written about the dire need for adult appropriation of the Faith on my blog over and over. Look under the tag catholic thinking.

In the not-so-distant past, unless the laity organized themselves at the level of the family into the domestic Church, religion did not survive in many countries.

The father as the head of the family, and the religious head of the home who passes on the Faith, with the wife to the children through many means, is an ancient idea. This is a corner-stone teaching in Catholic cultures. The Jews have this ideal as well, and perhaps, my families roots in that religion on one side, added to the awareness of the integral role the father plays in the domestic Church.

Matriarchies do not create strong Catholic families or real Catholic cultures. Our Church is patriarchal from top to bottom and from bottom to top, as created by God Himself in the Old Testament Covenant and in the New, through Jesus Christ, Our Lord. To say that Christ was a prisoner of His own culture and time is a modernist heresy, which denies that God created the models of society and the Church.

Now, in this culture in England and in some places in the States, (not Ireland, where youths have fallen away more), one sees a resurgence of the Millennials interested in religion, to the point where many youths are more religious than their Gen-X parents, but have no place to live out that religion in the non-religious homes. Is it the priest's duty to provide a domestic church?

The fact that seminaries may start putting the onus on priests to provide these places for youths is worrying, as a priest cannot be a superman, providing not only what he In persona Christi  needs to provide, but family rootedness in religion as well.

The laity are being massively irresponsible in not passing on the Faith to their own children and providing an environment for Faith to grow. Why should the priest take over what are the duties of the parents?

The Faith has always been family based, which is why over the centuries, the Popes have taught of the sacredness of family life as against other models, including the evil societal structures of socialism and communism, which undermine that primacy of family life.

Without strong Catholic families, the resusancy times would have seen the end of Catholicism in England.

The fact that many of the laity do not get involved in parish life, except in the obvious liturgical roles, has baffled me in England. My dad over 40 years ago, was helping with the finances of more than one parish as a volunteer, outside his full-time job with the military. He helped in cub scouts. He was president of Serra Club.  My mother helped in the school and in the woman's club. Both were in the choir. My mom held the choir picnics, and help organize the Christmas bazaar, making things all year round. And, they did other things in the larger community, as well as in the parish, plus raising four children, and sadly, losing four.

I grew up in a family of active lay people, volunteering for many aspects of parish life. And, lay involvement in my family goes back over 100 years, as my Great-Grandfather, a lay person, was made a Knight of St. Gregory and given other accolades by more than one Pope for his services to the Church.

What has happened is a real weakening of the Church at the base, and what needs to change quickly is the realization that without the domestic Church, there will be no institutional Church.

What happens if the institutional Church is persecuted by fines and imprisonments within our life-times as a result of the legal pressures of many issues regarding religious freedom and freedom of conscience?

Priests in England may be like John Wesley on horseback, moving from parish to parish, being the only sacramental source for hundreds of miles around.

The families broken by divorce are one cause of the demise of the domestic Church, but contraception and apostasy, relativism and consumerism undermine daily Catholic observance. Another huge problem are mixed-marriages, where the parents do not agree or cannot share the Faith. This use to be frowned upon as not viable. There has been in recent times a tremendous laxity in this regard, and poor sacramental marriage prep.

To expect the priest to be the creator of communities is a false hope and a waste of seminary training time. Priests for centuries in mission countries preached the Gospel, said Mass, performed the sacraments, and it was up to the laity to provide community.

I have brought pies and meals to the ill in my parishes. I have volunteered and done child catechesis, Holy Communion prep, Confirmation prep. Marriage prep, RCIA, I have entertrained groups in my home, and done catering for parish events. I have worked for pro-life and Catholic political issues.

If the lay persons do not learn their Faith and take over the community functions, including teaching, as many priests are not teachers. then the Church will continue to decay, not only from the top down, as in some countries, but from the bottom up.

Whose responsibility is the creating of Catholic community?