Understanding What We Must Never Forget

In the last quarter century, there has been a progressive  effort from intellectual iconoclasts to revise history about the Holocaust to besmirch the Catholic Church and particularly Pope Venerable Pius XII.  The criticism stems from charge that the Vatican did not do enough to save Jews during the Second World War, especially considering that the Giuseppe Cardinal Pacelli had been both the nuncio to Germany as well as the Vatican Secretary of State before assume the Chair of St. Peter.  In fact, historian John Cornwell charged that Pope Pius XII was Hilter’s pope, and the Vatican’s inaction weakened the Catholic Church and sealed the fate for the Jewry in Europe.

Soviet Leader Josef Stalin dismissed Papal power in the world by sarcastically quipping “How many divisions did the Pope in Rome have?”  Thus there is the reality that a Vatican condemnation stronger than Pope Piux XI 1937 encyclical Mit brennender Sorge (“On Burning Concern” originally released in German) condemning Nazi neopaganism and the “so called myth between blood and state”  would have only worsened the lot for Jews in the still publically obscured holocaust.

This sensational charge of “Hitler’s Pope” flies in the face of contemporaneous praise of Pius XII as a righteous gentile by prominent Jewish leaders, as well as documentary evidence from the likes of historian Rabbi David Dalin that Pius XII ordered Vatican envoys to aid persecuted Jews in occupied Europe and the Catholic Church opened facilities in the Vatican and Rome to shelter thousands of Jews from the Nazis.


In fact, it should be noted that there were prominent clergy who were aligned with Hitler–the grand mufti Hajj Amin al-Hussein.  At the Nuremburg trials of Nazi war criminals, there were allegations that the grand mufti  who advised and assisted the Nazis on carrying out Hitler’s Final Solution.  The Ba'athist party was a pan-Arab Socialist party which Ba'athist founder Michel Aflaq saw Nazi Germany as a model and were in power in Iraq under Saddam Hussein and the Assads in Syria.   It seems as if these slanderous charges against Pius XII were borne from anti-catholicism as well as exploiting a tragedy by obscuring those truly culpable. 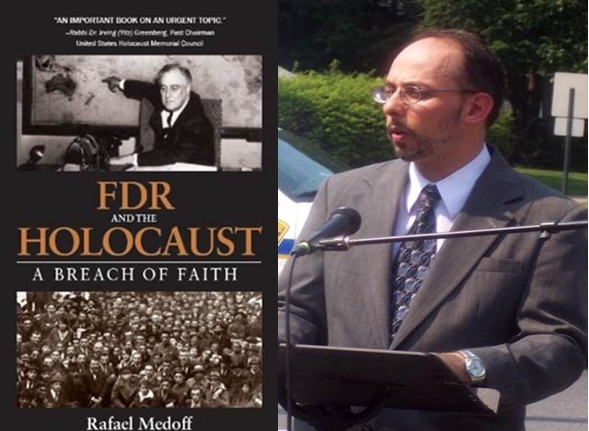 Holocaust historian Rafael Medoff has published “FDR and the Holocaust: A Breach of Faith” which examines the action (or lack there of), attitudes and apathy that FDR and the American government had during the Second World War as it relates to saving Jews from the Shoah.  Medoff charges that the FDR Administration failed to do relatively simple measures which would have saved many Jews, because FDR’s vision of America only encompassed having a small number of Jews.  Medoff wrote that: “In his private, unguarded moments, FDR repeatedly made unfriendly remarks about Jews, especially his belief that Jews were overrepresented in many professions and exercised too much influence and control on society.”  Hence his Administration went out of its way to discourage and disqualify would be Jewish immigrants.

Had FDR quietly permitted immigration quotas to be filled to the legal limit, it would have saved 190,000.   But the Administration opposed legislation which would have permitted the entry of 20,000 German Jewish childen, supposedly as it would set a precedent that would take away American jobs.

Medoff also suggests that the US could have bombed concentration (extermination) camps like Auschwitz as the US Army Air Corps would not be diverted as they were  targeting sites that were only five miles away from that infamous death camp that were gassing 12,000 victims a day.

This sort of nationalistic antipathy towards Jewish refugees is not surprising, considering the post-war antipathy towards Aliyah Alph and Aliyah Bet Jewish immigration as fictionally depicted in Leon Uris’ 1957 epic novel Exodus.  But Medoff’s evidence indicates that FDR was not the humanitarian and champion of the forgotten man myth that has developed, at least as applied to Jews in occupied Europe.

Medoff’s  thesis needs to be scrutinized to validate its bona fides. Trying to corroborate the slanderous charges in Cornwall’s Hitler’s Pope” discredited it to fair minded historians, but  not before the damage was done in the mind of popular public opinion.

Although Medoff is a prolific Holocaust scholar, but his interest is not simply in documenting what we should never forget.  Medoff has long postulated that the U.S. State Department has downplayed anti-Semitism in current diplomacy and feeds into a history of Foggy Bottom linguistic sleight of hand to achieve political objectives.

Being informed by this critque may help pragmatic policy wonks understand the Benghazi bungling, blindness to Ba'-athist atrocities in Syria and ignoring the spontaneous 2009 Green Revolution in Iran.  It also gives context to the Janus treatment of Israel, where President Obama talks a good game about standing with our Israeli partner, but stabs Israel in the back on the Palestinian land issue  regarding the 1967 borders, existential threats from the Revolutionary government in Iran as well as quotidian provocations from the terrorist Gaza State.