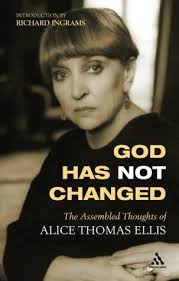 Today (8th March) marks the anniversary of the death of one of British Catholicism's stalwart figures, Anna Haycraft who wrote many books under the name, Alice Thomas Ellis.

Half Finnish and half Welsh, it was in her more mature years that her work began to be published and, indeed, she wrote for The Catholic Herald, among others, for some years until her article criticising the Bishops of England and Wales brought the wrath of Cardinal Hume upon her head, who, it is alleged, complained to the editor of The Catholic Herald resulting in ATE being unceremoniously sacked by the paper.

She was unrepentant and continued to berate the forces of liberalism that raged in the Catholic Church of England and Wales at that time.

In her book 'Serpent on the Rock' she travelled around Britain and Ireland seeking views from laity and clergy alike as to the state that the Church was in. She found, quite expectedly that the Church was in a parlous state with little or no sign of the reverent, spiritual Church that had led her to convert as a young woman.

After her dismissal from The Catholic Herald she wrote a fine piece headed: "I accuse the Catholic Bishops".

"Between 1980 and 1995 there was a net loss of 50,000 practising Catholics. This disaster was never publicised. Instead we heard constantly of the glorious ecumenical work being done by the Catholic Archbishop of Liverpool (the Most Reverend Derek Worlock)......."

She suffered the loss of her son, Joshua, through a tragic accident and wrote thse words in his memory:


﻿
"Joshua
for whom the sun
did not stand still
but as you fell headlong
so set for you,
as suns return
you too, most sweet beloved,
will return
and in the name of him
whose name is yours
rise again."