Catholic, then Protestant and then Catholic again

One hundred years ago precisely, a community of Anglican Benedictine monks in Wales converted to the Catholic Faith - were they the Proto Ordinariates?

The history of a small island community off the Pembrokeshire coast in Wales is an interesting one that resonates with the Ordinariate situation today.

Caldey Island (Ynys Pyr or Byr in Welsh) lies some four miles from the mainland and was first settled by Irish monks in the 6th century.

The "Caldey" name was given to the island by the Vikings who raided the Welsh coast on a regular basis and, translated from the Norse it means "Cold".

In the 7th century, when all was Catholic, Caldey became a Priory in association with the Benedictine settlement at St Dogmael's some 30 miles away in what is now Ceredigion.
A stone relic of the St Dogmael's Benedictines may be views at the National Shrine of Wales, Our Lady of the Taper in Cardigan.

The links for these two monastic communities went back to their mother house at the Abbey of Tiron in France. 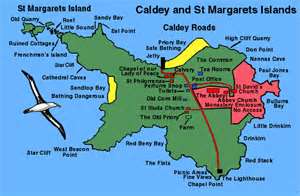 The Caldey Island Benedictines eked out a living under what must have been pretty extreme circumstances until Henry VIII destroyed the monasteries and shrines and stole all their religious vessels and art.

The island monks disappeared as so many other orders and secular priests disappeared and the island was left to the elements and, no doubt, a few farmers who would have ferried out their stock to fend for themselves until such time came for them to be slaughtered and salted ready for transportation to the larger towns and cities.

Then, in 1906, an Anglican Monk by the name of Aelred Carlyle purchased Caldey for his small community of monks.
It would seem that Abbot Carlyle was ahead of his time as he tried desperately to introduce elements of the Benedictine Rule into the Anglican Church and he struggled, also, to tame the island and make it a fit and habitable base.

He failed in the former and succeeded in the latter; the little community clung to the island like limpets to a rock and then, in February 1913, as a man, Abbot Aelred and his community converted to the rock of the Catholic Faith. 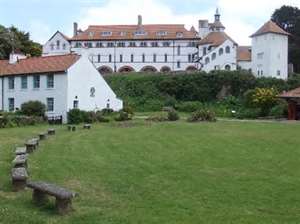 What was once part of the one true Church had been restored fully.

The going was, exceedingly tough in the following years and, in 1925, Abbot Aelred and his community yielded to the pressures of finance and the elements and left Caldey to move to the kinder climate of Gloucestershire's Prinknash Abbey.

There ended the Benedictine rule on the island.

But, a mere four years later a group of Belgian Cistercians from Scourmont Abbey took on the mantle of a lonely and demanding existence and occupied Caldey Island Monastery.

Today, the community of Cistercians is doing well and they market perfumes and chocolate that they produce themselves.

Novice applications are high as the island lifestyle has a certain romantic, if not fanciful air about it but the Abbot is shrewd enough to fend off who wish to escape from reality. 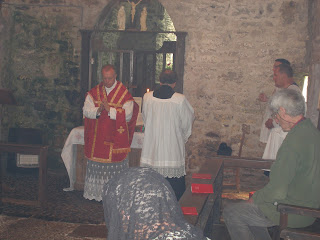 Unfortunately, the Latin Mass is no longer celebrated on Caldey except on the odd occasion by a visiting priest but, in Summer time, tourists take the short boat ride from Tenby to experience, in a small way, what it is like to be a monk in the 21st Century - not so very different from the 6th Century - a little more comfort and a lot less Latin, otherwise, the same.

NB: Abbot Carlyle led his monks into the Catholic Faith in February 1913 - one hundred years ago this month.

Email ThisBlogThis!Share to TwitterShare to FacebookShare to Pinterest
Labels: 100th Anniversary of Caldey's return to the Catholic Faith, Caldey Island, The Caldey Cistercians