Why have a Guild?

It's a fair question and one that has been raised quite a few times over the last three years or so.
Blogging is a sad solitary occupation and there are no advantages in having a group of bloggers; it's alien, it's controlling; it's unnecessary.

We in the Catholic Faith have always had Guilds, at least, in England, Wales and Europe
I believe that it is true to say that, in some respects, the trade union movement may have borrowed some of the aspects of the guilds but, of course, they missed the key essence, that of praying as a community in fulfilment of the words of Our Lord when He said: "Where two or three are gathered together in my name, there am I".

Christ was not just speaking of attendance at Mass or a Rosary group, Our Lord meant any occasion where He was the focal point of our attention. 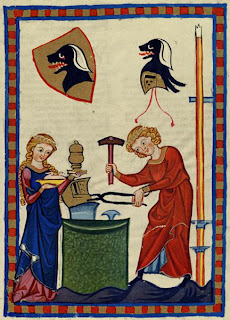 Photo:  Storm Within the Empire blog

Before the Reformation there were Guilds covering every possible category of artisans; weavers, blacksmiths, potters, artist's, clerks and so on.

And guilds unconnected to trades sprang up adopting various feasts or aspects of the Faith.
Corpus Christi is probably the most common of them and there were also many with affinity to Our Lady and the patron saints.

But the bedrock of the guild movement was their fundamental approach towards support for guild members and their families through prayer, attendance at Requiem Masses upon the death of a member, welfare support for widows and orphans, chantry provision (providing funds for Masses to be said on behalf of dead members and their families) and, of course, carousing together on the great feast days of Holy Mother Church.

This also, was an essential part of the movement.

All of these activities were enshrined within a framework of prayer and aspiring to a more spiritual life.

The Guild of Blessed Titus Brandsma is, in my mind, no different to its medieval counterparts although, admittedly, it has not yet established a process for praying for deceased members as we have yet to face that one, but, it will come in God's good time, the process, I mean.

Does it need to go further than that?

Almost certainly. I am sure that the old guilds also incorporated a very strong element of fraternal support where members helped and aided each other and I can see a time coming when the GOBTB could evolve into this sort of provision.
It would be good, for example, if perhaps a member could give a tutorial on blog management or pictorial techniques; I would certainly appreciate that.
Maybe Mary O'Regan could give us an insight into editorial research or some other element of journalism.


Many questions concerning the Guild were posed by Mark of Quam angusta porta but the outstanding one that I believe many have wrestled with is: What should we do with the Guild blog?

One suggestion made at the meeting of Guild members last month was that we should contribute what we perceive to be our best two posts each month to be carried on the Guild site.
I think that's a good way forward but, hopefully, it will not preclude Guild specific posts.

And then there is the wider issue still of evangelisation. That may appear a little pompous but, seen within the framework of the Faith that is surely something that we are all called to undertake.

If you sit back and review how the world of new communications technologies has developed in the past ten years, you will quickly appreciate that we are constantly moving into new territory and that Catholic blogging, in particular, has achieved some outstanding successes in revealing and exposing matters that might have had a very different outcome without the spotlight of attention that was beamed upon them.

I am thinking, in particular, of the move by Tescos to withdraw funding from the Gay Pride movement; there are many more and they were all achieved by the initial activity of Catholic and other Christian bloggers.

But these are early days for the Guild of Blessed Titus Brandsma and, I am sure that the Guild will grow to embrace such issues more fully.

Meanwhile, we pray for each other both collectively and individually and we carouse, but only occasionally and only modestly. And that's just part of Catholic tradition.

Please note: The Guild was the concept of Dylan Parry - A Reluctant Sinner. The above thoughts are purely my own and made without any authority other than that of a Guild member.

Posted by: Richard Collins - Linen on the Hedgerow