Another patron for the Guild? 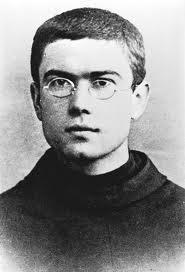 Not so dissimilar to Bl Titus Brandsma

Today is the feastday of one of my favourite saints, St Maximilian Kolbe, martyr of Auschwitz, a saint of our time.

St Maximilian's heroic act of self sacrifice is well known to all. When a Jewish prisoner was singled out for punishment by death, Fr Kolbe stepped forward and offered to take his place.

The Nazi guards had no concept of the great favour they were granting the Catholic Faith when they accepted his offer.

Fr Kolbe, along with 9 other prisoners was locked in a cell and left to waste away; no food or water was permitted.
Each day he celebrated Holy Mass and led the prisoners in singing hymns.

Each day, as the men died, one by one, the singing became fainter and fainter until, at last, only Fr Kolbe's voice could be heard.

Impatient to clear the cell the guards gave Fr Kolbe a lethal injection of carbolic acid and he won his martyr's crown.

But, in his earlier life as a priest, Fr Kolbe had worked as a journalist editing the Polish monthly,  Rycerz Niepokalanej (The Knight of the Immaculata).
In 1930 he  travelled to Japan where he founded a monastery at Nagasaki and lived for six years.

And when war started, on his return to Poland, he sheltered and organised an escape route for over 2,000 Jews.

After his martyrdom the Nazis cremated his remains on 15th August 1941, Feast of The Assumption of Our Lady.

To me, St Maximilian is very much in the same mould as Blessed Titus Brandsma, a journalist, one plagued with ill health, having a great devotion to Our Lady and, of course, winning the martyr's crown.

He might make a very appropriate additional patron for the Guild. Especially as he holds the following patronages:-

Against drug addictions, drug addicts, for families, imprisoned people, journalists, political prisoners, prisoners , pro-life movement - and could we add bloggers (or, rather, Catholics who blog?)

O Immaculata, Queen of Heaven and earth, refuge of sinners and our most loving Mother, God has willed to entrust the entire order of mercy to you. I, (name), a repentant sinner, cast myself at your feet, humbly imploring you to take me with all that I am and have, wholly to yourself as your possession and property. Please make of me, of all my powers of soul and body, of my whole life, death and eternity, whatever most pleases you.

If it pleases you, use all that I am and have without reserve, wholly to accomplish what was said of you: "She will crush your head," and "You alone have destroyed all heresies in the whole world." Let me be a fit instrument in your immaculate and merciful hands for introducing and increasing your glory to the maximum in all the many strayed and indifferent souls, and thus help extend as far as possible the blessed kingdom of the most Sacred Heart of Jesus. For wherever you enter you obtain the grace of conversion and growth in holiness, since it is through your hands that all graces come to us from the most Sacred Heart of Jesus.

V. Allow me to praise you, O Sacred Virgin
R. Give me strength against your enemies

Amen
Posted by Richard Collins - Linen on the Hedgerow

Email ThisBlogThis!Share to TwitterShare to FacebookShare to Pinterest
Labels: A martyr saint, Feasts of the Church, Martyr of Auschwitz, St Maximilian Kolbe