Today is the anniversary of the tragic yet glorious death of Father Anthony Brookby OSF, one time lecturer at Oxford's Magdalen College and one of the few members of the clergy who was not afraid to speak out against the actions of Henry VIII. 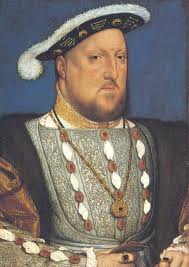 It would take a brave man to oppose this king

Preaching at St Laurence's Church in London, the Venerable Anthony Brookby, made clear his disgust at the King's proceedings and, as a result was arrested and thrown into what is described as "a loathsome dungeon".
We can only imagine what that meant.
Frequently, the martyrs were confined in dungeon cells that had hatches at street level and all the ordure of a 16th century London came pouring into their cell.
Damp, dark, foul and rat infested.

This saintly man was then promptly racked to such a degree that most of his joints were dislocated and, as a result, he was totally helpless not being able even to lift hand to mouth.

For twenty five days he was tended by an aged woman who looked to his needs and fed him.

Finally, when the courts realised that he was not capable of a public execution they despatched an executioner to his cell who then barbarously murdered the Venerable Anthony in his bed and with his own Franciscan girdle.