We are still in the month of November, the time dedicated specifically to the Holy Souls and especially to those who died while fighting for the cause of good over evil.
Death comes upon us, often without prior notice.
Equally, we stumble across death in the most unexpected of places.
﻿ 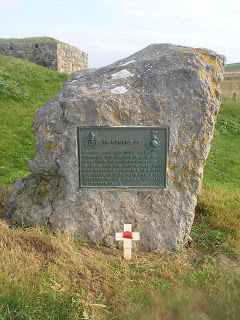 Freshwater West beach in South Pembrokeshire, is one of the wildest and most beautiful in . It is unknown except in recent years it has provided the main scenic backdrop to Robin Hood a la Russell Crowe and the latest Harry Potter films.
When the film crews and hordes of extras left, the beach returned to its normal solitary existence, the haunt of a few hardy walkers.
In the car park there is a small memorial stone and plaque dedicated to another drama that took place here some 68 years ago. A single poppy is at the foot, a sign that someone or some organisation has not forgotten.

Landing crafts LCG 15 and LCG16 and their crews were on their way from Holyhead to an unknown destination. Tragically, they tried to shelter in but were refused permission to enter. Continuing on  up the Pembrokeshire coast they ran into difficulties and in the dark the two craft lost contact with one another and LCG15 sank. A rescue lifeboat from the nearby HMS Rosemary went to the aid of LCG16 but that sank along with the landing craft.  One can only imagine the horror of the situation; both vessels embroiled in the rough seas and both sunk with the loss of all hands. Little time for a perfect act of contrition. Just men screaming as the panic and realisation set in and some, no doubt, ploughing on in an effort to retrieve the situation.
Seventy nine men died in those seas and their bodies were washed ashore on Freshwater West, some were still warm and locals tried in vain to resuscitate them.
Ah, love, let us be true
To one another! for the world which seems
To lie before us like a land of dreams,
So various, so beautiful, so new,
Hath really neither joy, nor love, nor light,
Nor certitude, nor peace, nor help for pain;
And we are here as on a darkling plain
Swept with confused alarms of struggle and flight,
Where ignorant armies clash by night.
Matthew Arnold
Eternal rest grant unto them O Lord,
And let perpetual light shine upon them.
May they rest in peace. Amen
26th April 1943