Is she the world's favourite saint?

Feastday Saturday 1st October
I mean, of course, St Therese de Lisieux, the Little Flower, the patron saint of the missions who never left her native , the nun who, despite dying at the age of 24,  made a massive impact on the world - by doing what?
By living the life of Christ! By embracing all that surrounded her in a fervent manner! By suffering for Christ as He had suffered for her on the cross!
"I only love simplicity, I have a horror of pretence"
Good words for Catholic bloggers to abide by
From Frances Parkinson Keyes’ biography ‘St Teresa of Lisieux’ comes this extract……….
“She observed every conventual rule for sefl-discipline meticulously, anticipated and expanded every precept for self-sacrifice.
Though stll beset by a sense of her own unworthiness, she bent her will and her spirit toward cleaving a pathway to Light.
“I will wait to make my profession” she told herself firmly, “as long as God may require. Only I could not bear it if were through my own fault that my communion with Him was indefinitely deferred.
I will put forth my best efforts to weave for myself a shining garment of goodness incrusted with the precious stones of righteousness.
When it is rich enough in His sight, He will not refuse to receive me as His own”.
We cannot doubt that it was “rich enough in His sight” long before the authorities of recognized its glory.
Being human they “saw through a mirror in an obscure manner” though yet “face to face”. But in heaven Teresa’s worth must have already been known; her name already “written”; and the time came, as it had come before, when her will – and heaven’s – could no longer be thwarted.
She made her profession on the eighth of September, in the year of Our Lord eighteen hundred and ninety.
The ceremony itself was not dazzling, as taking the habit had been, but the day was one of utmost splendour. No still snowbound night, this, but a mellow morning when the light seemed drenched in amber.
As the procession advanced, a great flock of swallows, sweeping across the glittering sky, suddenly swooped down and circled over the convent, skimming so close to it that their wings seemed to brush the walls.
As the procession passed, the bright birds shot upward again and vanished into etheral space.
They had gone as quickly as they had come. But none who saw their flight did so unmoved.
Was it only the wings of birds which brushed over the convent that day?
Or were there hovering angels, too, in that strange, swift flight?” 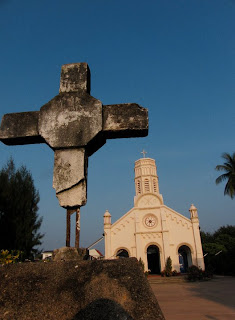