For Many - Last of 4 Part Catechesis on the Corrected Translation 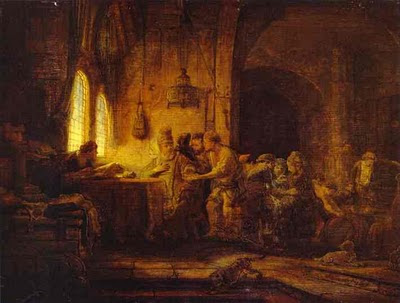 Before looking at the corrected translation let's look at the Gospel for today. Blessed Pope John Paul in his exhortation for the lay faithful, Christifidelis Laici, says that this Gospel is excellent for illustrating the lay vocation.

God doesn't pay by the hour. Perhaps there could be no greater payment than simply being called, being uniquely, personally, and intimately chosen by him to work with him, or rather, to allow him to work through us. Those who labor longer with him are rewarded with being in his presence longer. You can't put an hourly wage or any other reward on that. He is the best reward.


Listen to my homily for today:


He sends us into different vineyards: to our family, our relationships, and our work. In order to bring a fruitful harvest we must first be equipped and sent. This happens at the Holy Sacrifice of the Mass.
There are three different phrases which have been made more accurate in the corrected translation of the Mass. The first one we will will look at is the most important phrase, the consecration:

Take this, all of you, and drink from it, for this is the chalice of my Blood, the Blood of the New and Eternal Covenant, which will be poured out for you and for many for the forgiveness of sins. Do this in memory of me.

We notice that it is no longer translated as "cup" but "chalice." Fitting considering nothing else goes in the chalice except the precious Blood of the Lamb while a cup is what I drink water from the kitchen sink. We also notice that instead of "everlasting" the translation is "eternal." Amazing that God eternally has called us to partake of his very life.


However, the most drastic change her is the phrase, "MANY" instead of "ALL." First we have to not that this is simply a translation. Those in the past falsely used the principle of equivalence and tried to make everyone think that many should mean all. Why? Well, it simply is not Christian to believe that Christ did not die for all. As the Catechism of the Catholic Church states in number 605:

The Church, following the apostles, teaches that Christ died for all men without exception: "There is not, never has been, and never will be a single human being for whom Christ did not suffer."

Yet do all accept the gift of his redemption? Well obviously not. "Many are called but few are chosen" (Mt 22:14). Even Origen was guilty of a heresy called αποκαταστασις (apokatastasis), which basically teaches against the 27 times Jesus mentions hell in the New Testament basically saying that everybody is going to heaven. Many people sitting in Catholic pews probably ascribe to this heresy. Yet we have to follow the teachings of Jesus, not of the spirit of this age.


St Thomas Aquainas gives us his usual crystal clear clarity commenting on "the many". He says that Christ died for all and grants all sufficient grace to be saved, but only those who accept it have efficacious grace to save their souls. For a more lengthy treatment of this, read Pope Benedict's statement from his book that he wrote while still a Cardinal, God is Near Us: the Eucharist, the Heart of All Life.
The next phrase we will look at is:

Ecce Agnus Dei, ecce qui tollit peccata mundi. Beati qui ad cenam Agni vocati sunt.
Behold the Lamb of God, behold him who takes away the sins of the world. Blessed are those called to the supper of the Lamb.

This is much better than the previous translation simply because its reference to the book of revelation is much clearer. One day the Father will have gathered all, in heaven, on earth, and under the earth, all will bow down before the Lamb of God and all will know that he is Lord. How blessed are those who participate in the Eucharistic foretaste of that moment! It is such a grace to know who he is now. Our response is with faith and that is why the next phase is a biblical allusion to the faith of the centurion:

Domine, non sum dignus ut intres sub tectum meum: sed tantum dic verbo, et sanabitur anima mea.
Lord, I am not worthy that you should enter under my roof, but only say the word and my soul shall be healed.

Again, the corrected translation is far superior because it simply points to that encounter with Christ, the only one recorded in the Gospel where Jesus was "astonished" at his faith, of which he said,

This shows us that we must receive the Eucharist with faith. Only then will we permit God to be God and transform us into himself.
May the corrected translation bring about a greater harvest of faith and fruitful participation not only in the Eucharistic Mystery but in the apostolate of the lay faithful.