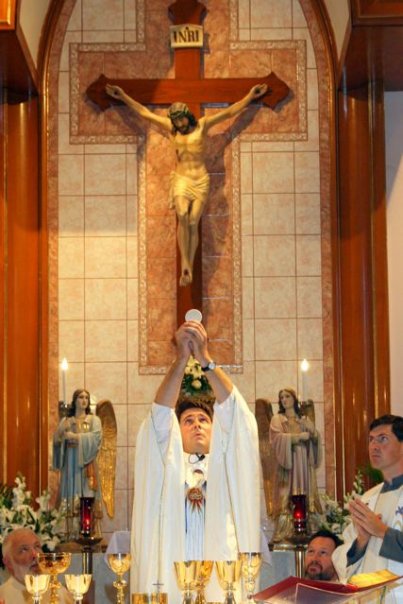 This is the second in a four part series to help the faithful transition to the new translation of the Mass.
Listen to my homily here:

If you have trouble listening, click here.
I said my first Mass as a priest in Latin. It is the same Mass of Vatican II, just in Latin. I just couldn't bring myself to use the translation, which I found, only with a rudimentary knowledge of Latin, to be deeply lacking in conveying the meaning of the original text.

This phrase is spoken by the faithful five times during the Mass: at the beginning when the priest greets the people in the trinitarian communion; at the Gospel before he is to proclaim the saving Word of truth; at the beginning of the Liturgy of the Eucharist before he will stand in the very place and person of Christ to consecrate the bread and wine to become the living Jesus Christ; at the peace of Christ given from the newly consecrated elements; finally at the sending of the people into their lives with the grace received at holy Mass.


What does it mean?
In the first few centuries of Christianity, it was a phrase only found in the Church. No where else did people use this interchange. St Paul used it in his epistles, but he took it from the early liturgy that was prayed in the first Christian homes of the faithful before there were even basilicas or churches.
The ordained minister is the only one to cry out, and when you hear it in Latin sung in a high pitched tone, it really pierces you and wakes you up:

Dominus vobiscum. The Lord be with You.

The reason why only an ordained priest would say this is because it is a priestly invocation, whereby the power of the Holy Spirit working through the prayers and gestures of the Liturgy makes himself present in a way he was not before, so that when he says, "The Lord be with you," the Lord becomes more present in the hearts of those who heart it with faith.


The faithful for their part, by responding, "and with your spirit," are referring to an ancient response that is singles out the spirit of the person, yet meaning the whole of the person. Blessed Pope John Paul II explained this Hebraism in his Encyclical, "Rich in Mercy." Although we speak of the heart, soul, mind, or even more obscurely in some scriptural passages to the liver or bowels of a person, we mean the whole person, yet in reference to that aspect of them signified by the part. If we say the Heart of Christ, we mean all of Jesus, yet in reference to his inmost core, which is pure and divine Love. Because it referred to the whole person, the translators of the Mass after Vatican II, took it upon themselves to translate it, "and also with you."
In the most ancient liturgies of Slovanic, Georgian, Syrian Armenian, and Arabic, it was never translated from Greek and Latin in any other way than, "and with your spirit." Also after Vatican II, all major languages of Italian, Spanish, French, and German, translated it as "and with your spirit." Why was English not translated that way? That is a very good question. Often times translators inappropriately overstep their authority to translate also the meaning, not just the words. At times there are good reasons for this, especially with euphemisms and cultural associations, but with Vatican II, there is no pretty way of saying it. We were robbed. They believed that referring to the whole person was better than referring to the spirit of the minister and so they took liberty, too much of it, to change the words.

Why is it important to refer to the spirit of the minister?
The minister stands in the place and person of Jesus Christ himself. He is a frail clay vessel holding the treasure of heaven. In the old covenant, the minister would enter the holy of holies once a year and if he had not been courageous in repenting fully of his sins before entering the sacred sanctuary, he would have been struck dead. They even used to tie a rope around his waste so that his corpse could be pulled out with little trouble. Yet in the new covenant, the minister enters the holy of holies, every time he confect the Most Holy Sacrament of the Eucharist.


Do priests need prayer? Yes. A lot of it. I would encourage you to really truly pray this from the heart, that you ask God to build up the spirit of the minister to make him holy, so that when you say, "And with your spirit", you truly are saying, may God sanctify your spirit, may he make your spirit holy, may the Holy Spirit sanctify your spirit.
Allow me to take this moment to speak personally to the hearts of those reading this. If you have been hurt, offended, or in any way scandalized by a priest, allow me to offer you a personal apology on behalf of my brother. I am sorry. He should not have hurt you. Please forgive us. Please also remember that he is merely a stand in, a substitute, an image, an icon for the real Father, the one who will not fail you, abandon you, or do anything to bring you unnecessary affliction or pain.


So when you say, "And with your spirit," pray it from the heart for priests. Let it be a sincere act of love to the one for whom he unworthily stands in his place. Let it be an act of worship.
Posted by SOLT Webmaster