The statue that refused to accept the will of men 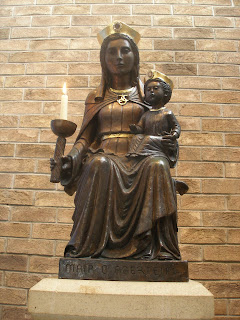 In Pre Reformation times, religious shrines to Our Lady were richly spread around and . With the degeneration of Henry VIII, the very public and very Catholic shrines suffered obliteration, or most of them at any rate.
Many of them had been maintained at the hands of monks in the Abbeys and Monasteries and, as the monks were expelled and the buildings destroyed and the finery of Catholic worship vandalised and stolen, so the shrines disappeared.
But the history of Our Lady of Cardigan or Our Lady of the Taper as this image of the Holy Mother is also termed, begins long before Reformation times.
The church of St Mary of Cardigan together with a chapel of St Peter were known to be in existence in the 12th century and, possibly, much earlier but the first official records relate to the year 1165 when one Rhys ap Gruffydd, Prince of South Wales, had won Cardigan back from Norman rule. He then granted Cardigan to the Benedictine Monks of Chertsey, Surrey as a .
Quite how Cardigan came to be a shrine is lost in time; we do know that, very soon after the Benedictines arrived, a statue of Our Lady "and her sonne upon her lappe, and the taper bernynge in her hande" was found on the banks of the River Teify or Tivy.
The statue was placed in the parish church but, according to legend, on no less than three or four occasions it returned to where it was found on the banks of the river. Our Lady was not to be moved by the will of men:
…that the same ymage was caryed thens unto Christes Church of Cardigane, and the sayd ymage wold not tarry there, but was
found thre or fowre tymes in the place where now ys buyIded the church of our Lady, and the taper brunnynge in her hande, which
contynued styll burnynge the space of nyne yeres without wastynge, untill the tyme that one foresware hymselfe thereon, and then it
extincted and never burned after.
As a result, a new church was built and the statue duly installed and the pilgrimages began. A priest daily celebrated chantry Masses (special bequests) for the pilgrims and the Knights Hospitallers of St John offered accommodation on the site of what is now The Angel Hotel.
St Mary’s Church today is owned by the (Anglican).
The image of Our Lady and taper seems to have been more common in medieval times as the town of Haverfordwest, some 26 miles from Cardigan also boasted a “lesser taper shrine”. Today, in , in Sardinia and shrines in , , , Guatamala and Tenerife are the only known homes, outside of , of Our Lady of the Taper.
In 1538 the Dissolution of the Monasteries campaign by Good King Hal and his merry men reached West Wales and the statue of Our Lady of the Taper was taken to for ceremonial sacrilege and burning and that, for many centuries was the end of both the statue and the shrine.
Until, 1904 when a community of Breton monks (the Llechryd one?), called their , Our Lady of Cardigan and the devotion was revived once more. It did not last long; they left the area in 1916 and it was to be a few years before the title was heard of again.
September 2010 and the Holy Father
blesses the statue and lights the candle
in Our Lady's hand symbolising
Christ the light of the World
In 1956 Bishop Petit of Menevia commissioned a new statue and, after a grand tour of it was installed in the Church of Our Lady of Sorrows in Cardigan (you see, Our Lady never deserted Cardigan, she was ever present under one of her titles). And on 23rd July 1970, Bishop Petit consecrated a new Church as “Our Lady of the Taper” (we shall gloss over the fact that it was and still is an architectural monstrosity). Here days later and the statue was transferred there and the shrine was re-born.
That statue did not last very long and a new one in bronze was created by Mother Concordia OSB and installed in 1986. Some 4,500 Welsh Catholics attended the installation – now that’s what I call a pilgrimage!
I shall leave the last words of the story to the website dedicated to the history of the shrine (click here)
“Its symbolism is that Mary presents her Son to us, as she did to the Wise Men, to be adored. The taper testifies that He is Light of the World. Pilgrims come to pray individually and in groups. May they learn to treasure the word of God in their hearts, as Mary did, and live by the light of her Son, who is her Saviour and ours.”
Our Lady of the Taper – Pray for
Our Lady of the Taper – Ora pro nobis
Posted by Richard Collins - Linen on the Hedgerow
Posted by Guild of Blessed Titus Brandsma

Email ThisBlogThis!Share to TwitterShare to FacebookShare to Pinterest
Labels: Cardigan, Catholic history, Our Lady of the Taper, Pilgrimages