That could have been a headline in a 13th century newspaper if they but had such things in those times. It refers to todays feast, that of St Dominic, scourge of demons, curse of the Albigensians and founder of course, of the Order of Preachers – a great order that has suffered a few spiritual troughs in the last 30 years but has weathered the Radcliffe/McCabe years and is now aspiring to gain possession of the high ground once more.
If I sound a little biased in favour of St Dominic and his order it is because I was educated, or partly so, by Dominican nuns; a particularly fierce and warlike community who came fresh from the African bush to North London to impose their brand of rough and tough Catholicism on some fairly basic boys and girls (no mixing of the sexes, of course, all lessons were run in duplicate).
I am sure that there will be many good posts today on the life of St Dominic so I have chosen to highlight one of the many episodes of his life rather than go down the road of a complete biographical approach. 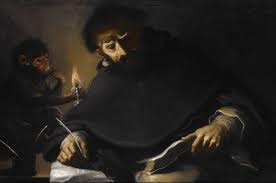 You can't monkey with St Dominic!
There are many accounts of St Dominic's fights with Satan and one, in particular, caught my attention, at the time he was resident at the monastery of San Sisto and, after praying for some time before the tabernacle he left to retire to his dormitory to undertake some writing.
As he lit a candle a demon in the form of an ape appeared and capered around the saint emitting foul verses and taunting him.
St Dominic commanded him to stand still and then placed a lit taper in his hand. The ape continued with his obscenities but as the candle burnt down so it began to burn his fingers. The demon began to howl and scream but St Dominic again commanded him to be quiet.
After a short period the candle had burnt so low that the fire had consumed the ape's index finger and he carried on howling and dancing in pain.
At last, the saint, taking up a walking cane, whacked the demon so hard that the sound was described as like a balloon bursting.
With that the ape disappeared through a wall never to return.
The only thing left behind was a terrible stench.
Prayer of St. Dominic
May God the Father who made us bless us.
May God the Son send his healing among us.
May God the Holy Spirit move within us and
give us eyes to see with, ears to hear with,
and hands that your work might be done.
May we walk and preach the word of
God to all.
May the angel of peace watch over us and
lead us at last by God’s grace to the
Kingdom. Amen.
﻿
Posted by Richard Collins - Linen on the Hedgerow﻿
Posted by Guild of Blessed Titus Brandsma