The American Cardinal who backed a man called Sarto

Cardinal James Gibbons, 1834 to 1921 was one of America's great prelates. He was appointed Bishop of Richmond in 1872 and was made Cardinal in 1886 during which time he became the face of the Catholic Church in the USA and a powerful advocate on behalf of the people and a man not afraid to fight his country's corner in Rome. 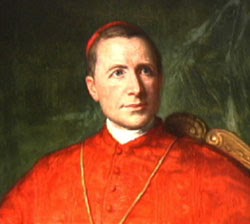 Cardinal Gibbons - the Pope maker!
He served initially, under Pope Leo XIII and upon his death he worked hard behind the scenes to secure one Giuseppe Melchiorre Sarto as Leo's successor. He had recognised, in the then Cardinal Sarto, a man who had visions beyond Europe and who was intuitively driven to appreciating the emerging Catholicism in the USA.
It was to Cardinal Gibbons that Cardinal Sarto went in a state of doubt over the decision of the Conclave to appoint him Pope and it was Gibbons strength that saw him accept the Papal crown.
Cardinal Sarto is, of course, Pope St Pius X whose feastday was celebrated yesterday, Sunday 21st August.
This is an extract from Theodore Maynard's book, The Story of American Catholicism......writing about Cardinal Gibbons.....
"In a unique sense he was the American Cardinal. It was fortunate indeed that he was a Bishop for fifty-three years, the Archbishop of Baltimore for forty-four, and a Prince of the Church for thirty-five.
He came to be so much of an institution that it was impossible for anyone, here or abroad, to think of the Catholic Church in America without also thinking of Gibbons.   ....Quite literally he grew up with the Church in America, and it was under him that the Church grew.
There was no Catholic movement in which he did not take part or, in his unobtrusive fashion, make himself felt.
He came to the rescue of the Knights of Labour; he was one of the chief targets for attack by the Conservatives during the School Controversy and the 'Americanism' misunderstanding; he was sympathetic to Dr McGlynn and worked with Cardinal Manning in England to prevent Henry George's Progress and Poverty being placed on the Index.   ....If he had an incalculably great influence at home, both in the Church and in regard to the relations of American Catholics with their Government, he brought off at least one master-stroke that affected the fortunes of the Church throughout the world.   ...It was really Gibbons, more than any other man, who made Pius X Pope.
....No great man was ever more accessible than the Cardinal. His romps after Benediction with the altar-boys were proverbial (Remember, these were times of great integrity and innocence).
All Baltimore was full of people who would tell you proudly, 'I'm a friend of Cardinal Gibbons.'"
ends/..................
If we recognise no other achievement of this fine Cardinal, we should be immensely grateful to him for his support for one of the greatest Popes of recent history, Pope St Pius X.
Posted by Richard Collins - Linen on the Hedgerow
Posted by Guild of Blessed Titus Brandsma