This talk was given to Catholic Youth at the Virgin Mother of Good Counsel Parish Youth Group, Saturday, July 23, 2011
If you said you were proud to be Catholic or you thought the 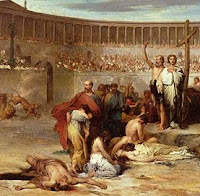 Catholic religion was the correct religion, the true Church, certainly people, even some catholics, would accuse you of being proud or arrogant, or not seeing the “whole picture.”

If you said that you though Muslims were right, or that atheists had the proper view, this is certainly more en vouge in popular circles.  More so if your were to say that it is not possible to have the right view, that whatever you feel is right must be true for you.  If anybody says anything against Jews, Muslims, or any ethnic group it would surely be the end of their career and their respectability. Yet if someone says something against the Catholic Church it is considered normal, socially acceptable, or even intelligent.

Anti-Catholicism is the last acceptable prejudice.

(From non-catholic author Philip Jenkins) which is why it is easy for Catholics to falsely believe ourselves as second class. Things that try brainwash us into thinking this:
-Bullying at School, even Catholic School to make one think it is not “cool” or popular to be Catholic

Christ said, “If the world hates you realize that it hated me first” 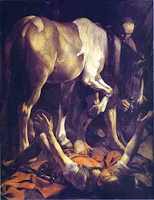 It is Christ himself who is persecuted in his Body the Church. “Why do you persecute me?” Jesus to Saul after he’d killed Christians.

SO IT IS CHRIST WHO DEFENDS HIS CHURCH, WHO DEFENDS YOU WHO ARE HIS BODY.
How does Jesus defend you? Through the Sacraments, he gives you grace, peace, joy, and the inner strengthening of the Holy Spirit, who is given to those who ask in faith with prayer. He gives you the graced-friendships of the Church here on earth to strengthen you.

Yet, he also asks you also to use your wits he gave you.
YOU MUST DEFEND THE CHURCH

How? Understand most of the attacks are not mostly on what the Church believes (although these are present too) but on the identity and dignity of Catholicism to try to attack its moral authority.

For example: Constantly bashing the Church for sex abuse scandals

REALITY: The safest statistical place in the world right now is in Catholic Churches, and it always has been! It has always been statistically safer than schools, the workplace, or even the family.

FACTS:
-there are far more cases reported against married protestant clergy USA: 6% catholic priests 13% protestants Germany: least of all professions (this is from insurance claims and criminological studies)
-The Catholic Church has the harshest possible laws and policies against abuse than any other institution (juridical profession has noted this).
-There should be 0% abuse from priests and the fact that they are the most discussed is a subconscious acknowledgment of its moral authority. In other words, the fact tha
t the media is more upset by priests committing these terrible crimes shows that they respect the authority of the priesthood.

Another Attack is History: there are terrible sinners in Catholic history. People would hold them up to be the official Catholic view when they were in fact against the mind of Christ:
atrocities committed in the name of the Crusades, misconstruing Galileo...

Yet saints stand right along side of them - weeds and wheat together.

“BE OF GOOD CHEER. I HAVE OVERCOME THE WORLD” (Jn 16:33)
We are called to be confident - proud to be Catholic.
At this point in English History a shift is taking place. Many people are realizing that in order to be human, to be noble, to be upright, to be a good Englishman, one must become a good Catholic. Only the stability and the faithfulness of the Catholic Church can preserve the best and most noble part of England, its very soul - its faith.

The signs of that reveal this are the following:

-The Holy Father’s Visit revealed that England, while it is very secular, still has the desire to be a Christian nation

-The many thousands of conversions that are happening at this time

WHY IT IS SO AWESOME TO BE A CATHOLIC:

HOLY EUCHARIST: Walk into any Catholic Church in any country for the
past 2000 years and you will find Jesus Christ truly present in his Body, Blood, Soul, and Divinity in the Holy Eucharist. You will find the very same ritual given to us by Jesus himself, the holy mass, where Jesus himself, in the person of the priest says to you personally, “This is my Body...This is my Blood...given up for you”

The true presence is different than any other reality. It is the fact that he is reserved in all the tabernacles of the world. Everywhere in the world you can look around and say, “God is here.” Only in heaven and only in the Eucharistic Host can you say, “THIS IS GOD!”

CONFESSION: Every Catholic priest in the world has been given the power by Christ to completely obliterate sin out of your life in the Sacrament of Confession. Jesus gave this power to priests when he breathed on his first priests, the apostles, and said “Receive the Holy Spirit, whose sins you forgive, they are forgiven.”


Think about it, if you ever experience any fear, worry, anxiety, depression, loneliness, if you ever do anything wrong, any sin or evil, when you repent by confessing your sins to God’s representative he says to you, “I Absolve you” and frees you from all of this! Most of the emotional difficulties people struggle with are from sin or from the terrible vacuum of love caused by it. Confession heals. Just do it!

ANOINTING OF THE SICK: a priest can come to you when you are dying, forgive your sins, anoint you with the strengthening oil of the sick, give you the apostolic pardon freeing you from all punishment even in the next life, and hold your hand as you pass from this life to the next handing you off to Jesus who will embrace you with the Father.


MOTHER MARY: You have a beloved Mother who always pleads your cause, waits for you, hears your prayers and intercedes for you before her divine Son. She never draws us to herself but only to God. Every time we say, “Hail Mary!” she says “Hail Jesus!” Every time

POPE, SUCCESSOR OF ST PETER: The simple fact is that the

Catholic Church is the one Church that Jesus Christ founded when he told St Peter, “You are Rock and upon this rock I will build my Church and the gates of hell will not prevail against it” (Mt 16:18). Pope Benedict XVI is the 266 of St Peter.

NO OTHER christian community claims this, that they belong to the very Church founded by Jesus Christ, that he is their head. They claim to have the teachings of some particular man but not Christ himself.

There are over 200,000 Christian denominations. When was your Church founded?
Be proud to be be Catholic! BE NOT AFRAID! God will be with you to show you how to proclaim the Gospel to the people of our time with wisdom, courage, and that noble dignity of Christ to which you are called.
Posted by SOLT Webmaster