The feast of St Benedict 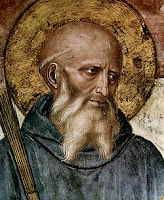 11th of July is the Feast of St Benedict, the founder of western monasticism and co-patron saint of Europe.

Benedict was born c480 in Nursia, Italy. The son of a Roman noble man he had before him a life of academic learning, wealth and privilege but gave this up to live in solitude in Enfide, about 30 miles from Rome. As St Gregory writes, "giving over his books, and forsaking his father’s house and wealth, with a mind only to serve God, he sought for some place where he might attain to the desire of his holy purpose; and in this sort he departed [from Rome], instructed with learned ignorance and furnished with unlearned wisdom" (St Gregory, Book II Dialogues). Benedict took his former nurse with him as a servant and they settled with "a company of virtuous men" who were in sympathy with his desire to live a life totally dedicated to God.

Whilst in Enfide, he performed what is now attributed to be his first miracle - he restored an earthenware vessel used for cleaning and separating seed from wheat, which his servant had accidentally broken. The eventual notoriety this brought forced Benedict to leave Enfide to live the life of a hermit in a cave near Subiaco. Romanus, a monk from the monastery above the cave, gave him the monk’s habit and for three years he was the only person with whom Benedict had contact.

Upon the death of the abbot of another monastery the monks persuaded Benedict to become their abbot, but the experiment failed and the monks tried to poison him on two occasions. The first was with drink. but after Benedict prayed over the cup, the cup shattered. The second attempt was with bread. When Benedict prayed over the bread, a raven flew in and took it away. A cup and a raven are symbols that accompany images of St Benedict. The knowledge of these, and other, miracles brought many people to Benedict to seek advice and counsel. It was from these people that he formed and built thirteen monasteries, of which he remained abbot of them all, living himself in one of them. He spent the rest of his life as a monk and formulated his Rule.

Whilst the Rule of St Benedict is clearly addressed to members of the monastic community, it is also directed towards instructing the laity. In his book The Rule of Saint Benedict for Family Life Today, Don Massimo Lapponi expertly applies the Rule to day to day situations in which every family can be drawn closer to God. In his foreword to the book, Cardinal Franc Rodé (Prefect of the Congregation for Institutes of Consecrated Life and Societies of Apostolic Life) writes,
The author of this book, who, among other things, has the merit of brevity but also knows how to say a lot in a few pages, enables us to see directly how topical is Benedictine wisdom not just for guiding religious communities, but also for giving new life and new hope to the family community. In fact, the institution of the family will not be saved by conferences and discussion groups, and not even by legislative reform – no matter how desirable it may be – but only by promoting a lived model of social life which is an alternative to the one which is now prevalent everywhere. "And it seems to me", our author writes, "that in fact there exists only one model which today can effectively be proposed to families: the Benedictine model that emerges from the Rule and tradition."
As we celebrate the feast of St Benedict, pray for the familles of men and women who live in Benedictine houses throughout the world. Pray too for every family that it may be inspired and challenged by St Benedict.

Picture of St Benedict is detail of a fresco by Fra Angelico (1437-1446).
The book The Rule of Saint Benedict for Family Life Today is published by ST PAULS and can be purchased here.