This must surely fall under the category, strange but true; Cistercian monks living under the ever watchful eye of one of the world's most oppressive Communist regimes, China. 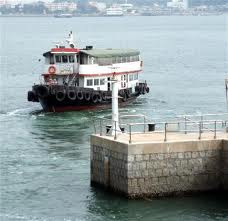 The kai-do departs the empty quay of Tai Shui Hang
In fact, this monastery (Our Lady of Joy Abbey) lies within the bounds of Hong Kong, only handed back to China in 1997 and the authorities have, very wisely, left the monastery alone as far as one can tell. 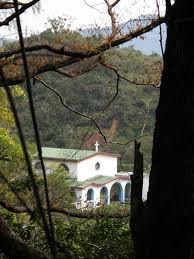 I used to spend quite a lot of time working in Hong Kong and, on a free Sunday about ten years ago, decided to visit this monastery and see for myself just how well the monks were surviving under Communist rule.
There are two routes to take to get to this remote monastery, one is a hiking one estimated to take 1 to 2 hours once you reached Lantau Island and the other is a two ferry journey and then a half mile hike through the jungle.
I chose the latter; ferry trips in Hong Kong are like bus trips in London. They are regular and you may hop on and off at will and the prospect of a longish slog in high humidity did not hold much appeal
.
The first (large) ferry took me from Discovery Bay to Peng Chau island (a step back in time in its own right) and from there I caught  a smaller ferry called a kai-do which would drop me at the lonely quay of Tai Shui Hang on Lantau Island.
I was the only soul to disembark and, before the kai-do departed, I made sure that it would be back in four hours time for the return journey.
There was nothing to suggest that I was close to a monastery, there was no sign of any human or habitation whatsoever, just a steep track leading up through the jungle. Setting off I laboured up the incline rapidly losing any enthusiasm for the Trappist cause. After 15 mnutes I came across a crude sign with a cross carved on it and that reassured me that I was on the right path. Another 15 minutes and I could just make out some buildings through the trees in the distance but first, a walk past a rather ominous and dark pool; I stopped to look for any sign of wildlife and a large swirl and something black and reptilianish slithered into the water.
My pace quickened and I soon reached the monastery. 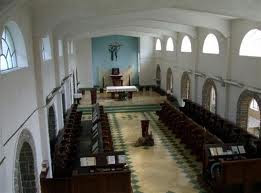 A depressingly modern and soulless sanctuary
The history of this monastery is a little fragmented. Originating in what was then Pekin (many Chinese still refer to Pekin rather than Beijing) in the 19th century they moved to Chengdu in Szechuan Province and, in the chaos of Chiang Kai Shek's nationalist forces fighting Mao's peasant army, the monks yet again decamped to the safer shores of Hong Kong in 1947. 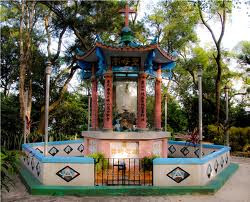 Our Lady of Joy shrine Cantonese style
The monastery was, surprisingly civilised considering its location, and, there were several small groups of Hongkongese making their way around the site.
Pausing for breath I joined the fringes of a group saying the rosary in front of Our Lady of Joy. Despite the fact that they recited the beads in Cantonese I was able to follow roughly in English and my presence caused a few nervous giggles from the group.
I then inspected the church and made the customary Our Father, Hail Mary and Glory be to gain my indulgence - is that still done these days when one visits a church for the first time?
All seemed in normal monastic order and the monks, despite being 'enclosed' seemed very relaxed strolling about the grounds.
I found an English speaking monk and asked him if they celebrated Mass in Latin.
"No" came the reply "we only say Mass in Chinese" (Cantonese).
I asked again as I felt certain I had been misheard.
"No" said the monk - "to say Mass in Latin is forbidden".
I am not sure just who has forbidden it in this man's mind but I was unable to speak to him much more on the subject as there were signs that he was 'losing face' in not being able to satisfy my questioning. I left it at that.
I do not know how they have fared in the past ten years or so; whether the authorities have turned a blind eye to them or, more likely, they have just bent to the prevailing wind and only maintain a cosmetic form of Catholicism. That may sound pessimistic but the Chinese are a pragmatic race and often their take on religion is tinged with what the state demands.
Many times while in China people would say to me "We need religion, we need faith" and I would always respond with the question "Why?"
"To make us good" they would answer "We need religion to make us good".
Posted by Richard Collins - Linen on the Hedgerow
Posted by Guild of Blessed Titus Brandsma