Treasures of Heaven - The British Museum brings together some of the world's most extraordinary Christian relics, including the Mandylion of Edessa

The British Museum opens its latest major exhibition today, called Treasures of Heaven: saints, relics and devotion in medieval Europe. This exhibition, which will run until 9 October 2011, will bring together for the first time some of the finest sacred treasures of the medieval age. It features over 150 objects drawn from more than 40 institutions including the Vatican, European church treasuries, museums from the USA and Europe and the British Museum’s own pre-eminent collection. Amongst it star attractions is the Mandylion of Edessa, the holy image of Christ's face that is kept in the one of the Pope's private chapels. As this image is rarely seen in public, a visit to the British Museum this Summer will be a must for many Catholic and Orthodox believers.
According to the British Museum's introduction to the Treasures of Heaven: -

It was during the medieval period that the use of relics in devotional practice first developed and became a central part of Christian worship. For many, the relics of Christ and the saints – objects associated with them, such as body parts or possessions – continue to provide a bridge between heaven and earth today. 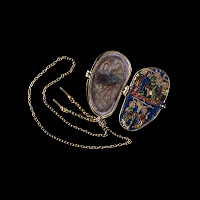 Relics were usually set into ornate containers of silver and gold known as reliquaries, opulently decorated by the finest craftsmen of the age. They had spiritual and symbolic value that reflected the importance of their sacred contents.
The earliest items date from the late Roman period and trace the evolution of the cult of the saints from the 4th century to the peak of relic veneration in late medieval
Europe.
Relics featured in the exhibition include three thorns thought to be from the Crown of Thorns, fragments of the True Cross, the foot of St Blaise, the breast milk of the Virgin Mary, the hair of St John the Evangelist, and the Mandylion of Edessa (one of the earliest known likenesses of Jesus).
Treasures such as these have not been seen in significant numbers in the UK since the Reformation in the 16th century, which saw the wholesale destruction of saints’ shrines. The exhibition offers a rare opportunity to glimpse the heritage of beautiful medieval craftsmanship that was lost to this country for centuries.

The Mandylion of Edessa - also known as the Holy Towel or the Image of San Silvestro.
According to legend, the first century King Agbar of Edessa wrote to Jesus, inviting him to live in his city, for he had heard that there was a plot to kill the Messiah. King Agbar also suffered from leprosy, and asked Our Lord to heal him. According to the early Church historian, Eusebius of Caesarea, Abgar received a response from Our Lord, informing the King that he would not be able to visit, though promised to send one of his disciples after the Ascension. Eusebius claimed that Thaddaeus (Jude) eventually made it to Edessa, bearing the words of Jesus, by the grace of which King Abgar was miraculously healed. 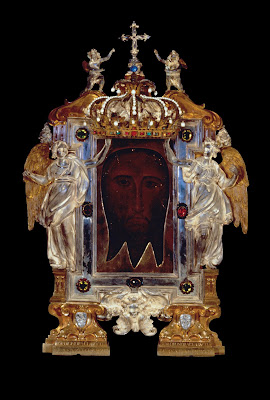 Other accounts of this story, especially within the early Syriac Doctrine of Addai, recount that King Abgar actually sent a messenger called Ananias to ask Jesus to visit Edessa. Apparently, Ananias was also a painter, who attempted to paint a portrait of Our Lord. But, because of Christ’s dazzling glory, the artist was unable to complete the work. Jesus therefore left the artist an imprint of his face by wiping it on a towel - hence “Mandlyion” is often translated as “Holy Towel." This divine portrait, was then taken back to Edessa and conserved in the royal palace. It’s claimed in this version that it was by touching this relic that the king was finally cured of his leprosy. Other authors from the ancient world also claim that an angel painted the image.
Evagrius Scholasticus wrote in AD 593 the first known account of the existence of a physical image in the ancient city of Edessa (modern-day Urfa in Turkey). In the Ecclesiastical History, Evagrius mentions a portrait of Christ, of divine origin (θεότευκτος), which had miraculously helped the people of Edessa against an invading Persian army. It seems that this image had been found hidden in a wall, where a Christian bishop had placed it for safe-keeping after the kings of Edessa had reverted to paganism.
The holy image was reportedly transferred in to Constantinople, capital of the Byzantine Empire, in AD 944, along with the original letter from Jesus to King Abgar. The monastery of Saint Catherine on Mount Sinai, still claims to have two side panels from a triptych that had been designed for the Mandylion at this time - the Mandylion itself would have been the centre-piece. The Orthodox Church still commemorates the Translation of the Mandylion to Constantinople on 16 August.
The "holy towel" disappeared from Constantinople during the scandalous Fourth Crusade in 1204. Some claim that it then became one of St Louis IX of France's wondrous relics, which he stored in his specially designed Parisian church, Sainte Chapelle - originally built to house the Crown of Thorns. Some scholars have argued that the image at Sainte Chapelle was probably that which is now called the Shroud of Turin. Having said that, some historians claim that the Mandylion as once owned by the kings of France was part of King Louis IX's collection and that it was eventually destroyed during the French Revolution.
It may be, though, that the Mandylion had found it’s way to Rome by the 15th century – where it was housed in the convent at San Silvestro in Capite until 1870, when Bl Pope Pius IX had it moved to the Vatican for safe-keeping. This image is now kept in the Matilda Chapel – one of the Pope’s private chapels. It is housed in a Baroque frame donated by a nun, Sister Dionora Chiarucci, in 1623. The earliest evidence of its existence is 1517, when it seems that the nuns of San Silvestro had been expressly forbidden to exhibit it - to avoid competition with the more famous Veil of Veronica, housed in St Peter's Basilica. There remains some debate as to whether the Vatican's image is the original Mandylion, or whether it is a very early copy - as it seems to date from the 4th century, if not later.
In the summer of 1996, the Vatican Museum’s chemistry and painting restoration laboratory analyzed their Mandylion. Although it seems to date from the 4th - 5th century, the linen cloth itself was found to be glued to a cedar support panel. It was also confirmed that the face of Christ was “painted,” although the non-destructive tests were insufficient to specifically confirm what type of painting medium was used.
Having conceded that it may be the work of human hands, if one looks closely at the Mandylion of Edessa as found in the Vatican - by zooming in on this high resolution image - it is clear that the eyes have a very human quality. The irises are extremely detailed and it is even possible to see their unique pattern. For all the doubts as to the historicity of the Mandylion and as to whether the Vatican's image is the original, I personally have the feeling that what we see here is some mystical image of Our Lord's face. It is obviously highly regarded by the Pope - who is usually the only person with access to it!
To see the Mandylion and the many other sacred relics and images included in the Treasures of Heaven, please visit the British Museum website for visiting times and ticketing details.
This post was published simultaneously on A Reluctant Sinner by Dylan Parry
[Images: Top: Reliquary pendant of the Holy Thorn (as seen on the recent BBC4 documentary, "Treasures of Heaven"), Paris (c 1340), The British Museum; source: The British Museum. Bottom: The Holy Mandylion of Edessa, The Matilda Chapel, The Vatican; source: The Vatican Splendours exhibition]
Posted by A Reluctant Sinner

Email ThisBlogThis!Share to TwitterShare to FacebookShare to Pinterest
Labels: Relics, The Mandylion of Edessa, The Vatican