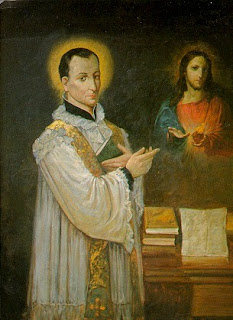 It is well-known that June is the month of the Sacred Heart, when Catholics are called to renew their devotion to Our Lord's physical heart, which overflows with an infinite and intense mercy and love for each and every human being. Of course, the devotion to the Sacred Heart of Jesus is an ancient one that became especially popular in medieval Europe. But, the person who really injected life into the devotion was St Margaret Mary Alacoque, the French nun whose visions in the 17th century led to increased reverence towards the Sacred Heart.
St Margaret Mary was helped by her confessor, St Claude de la Colombière SJ, who promoted the devotion to Our Lord's heart and is often known (along with St Margaret Mary) as an Apostle of the Sacred Heart of Jesus. It is a little known fact, though, that St Claude spent a large part of his ministry in London, and even suffered under the anti-Catholic persecutions that had come about through the malicious lies spread by a former seminarian called Titus Oates. It is amazing to think that this great man lived at St James's Palace, and was a chaplain not only to Margaret Mary Alacoque, but also to a future Queen of England.

Claude de la Colombière was born of French noble parents in 1641. He had a happy childhood, surrounded by a devoted family and very close friends. Although known for enjoying life to the full, Claude entered the Jesuit novitiate as a 17-year-old, where he spent several years studying for the priesthood and working as a teacher in various institutions. After his ordination he taught at the Jesuit college in Lyons, whilst also preaching retreats and serving as moderator for several Marian congregations.

In 1674, Claude de la Colombière took a personal vow, under penalty of sin, to observe the Rule and Constitutions of the Society of Jesus to the utmost perfection. This personal vow of his became a source of inner freedom and helped Claude attain an early sanctity and a renowned ability to be greatly compassionate and empathetic towards others.

Claude was appointed the Rector of the Jesuit college at Paray-le-Monial in 1675. It was during this time at Paray that he became St Margaret Mary Alacoque's spiritual director. He encouraged and supported her though a difficult period when her own community was highly suspicious of her supernatural visions and claims about the Sacred Heart. Colombière also strove to assure the anxious young nun that her visions were authentic. He instructed her to write down all that she had experienced and pledged himself to the mission of spreading the devotion to the Sacred Heart of Jesus. 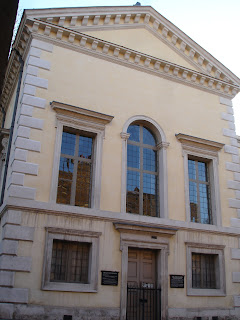 In 1676, after only a year and half in Paray, Claude de la Colombière was sent to London, as he had been appointed "Preacher to the Duchess of York" - Mary of Modena, wife of the then Duke of York and future King James II (England's last Catholic king). This role was fraught with difficulties because of the anti-Catholic sentiments that prevailed in England at the time. Despite this, Fr Claude de la Colombière took up residence at St James's Palace in October of that year. He ministered at the Queen's Chapel, which had been built as a Catholic chapel for King Charles I's wife, Henrietta Maria. This Royal chapel still exists, though has since been converted into an Anglican place of worship - the Queen's personal chaplain normally resides there to this day.

According to the Claude's official biography on the Vatican website: "In addition to sermons in the palace chapel and unremitting spiritual direction both oral and written, Claude dedicated his time to giving thorough instruction to the many who sought reconciliation with the Church they had abandoned. And even if there were great dangers, he had the consolation of seeing many reconciled to it, so that after a year he said: 'I could write a book about the mercy of God I've seen Him exercise since I arrived here!'"

The intense pace of Claude de la Colombière's work in London and the city's poor climate combined to undermine his health, and evidence of a serious pulmonary disease began to appear. Claude, however, made no changes in his work or life-style. At the end of 1678, though, Fr de la Colombière was calumniously accused and arrested in connection with the so-called Titus Oates' Plot. After two days of interrogation, Claude was transferred to the severe King's Bench Prison where he remained for three weeks in extremely poor conditions until he was finally expelled from England by royal decree. His imprisonment had further weakened Colombière's health, which deteriorated rapidly upon his return to France.

The last two years of St Claude's life were spent at Lyon, where he acted as spiritual director to Jesuit novices. He also returned to Paray-le-Monial, where he sought to improve his health. Immediately after his death in 1682, St Margaret Mary received a special revelation from Heaven, confirming that Claude de la Colombière did not need prayers as his soul was already enjoying the Beatific Vision.