The Feast of St Philip Neri

To celebrate the feast of St Philip Neri (May 26th) here is another extract from ‘Crown of the Year’...

This biennial has been been called ‘Brompton’ Stock since the 18th century when it was bred by George London and Henry Wise in a nursery in Brompton Park, where the museums of South Kensington now stand, in other words just down the road from Brompton Oratory. The plant produces crimson, pink, lavender, mauve or white, scented flowers from March to May on sturdy, branching stems. This sturdiness is possibly the origin of the name ‘stock’ for this word also means ‘tree trunk'.

I have chosen the Brompton Stock for St. Philip because he is the sound trunk from which sprang his English legacy, famously residing at Brompton Oratory in London. Developed by Fr Faber, this Oratory, together with that of Birmingham, had been founded by Cardinal John Henry Newman, England’s most eminent Oratorian. The performance of the ‘oratorio’ has come to be regarded as a very English musical activity, and it is perhaps surprising that it developed from the services of the first Oratorians in Rome, which made full use of musical and artistic resources (Palestrina was among St Philip’s penitents), and the English Oratories still work hard to maintains a high standard of liturgical music.

Philip was born in Florence. He lost his mother whilst he was still a child but was fortunate in having a good stepmother. He was educated at the famous Dominican convent of San Marco, where the frescoes of Blessed Fra Angelico (c. 1400-55) must have made a deep impression. He worked for a while in the business of an uncle who planned to make him his heir, but Philip began to yearn for solitude and to realize that he was not destined for a life in commerce.

When he was 18 he left for Rome and, while tutoring his landlord’s two sons, began to live almost as a hermit, studying theology and philosophy and spending whole nights in prayer, often in the catacombs. There, one night in 1544, he had a shattering ‘vision’ in which it seemed that a globe of fire entered his mouth and dilated his heart. The experience apparently left permanent physical effects, for at his autopsy his heart was found to be so enlarged that several of his ribs had broken to accommodate it. But at the time of the ‘vision’ Philip felt that the globe of fire was the Holy Spirit filling him with a love that he was unable to endure. Perhaps that is what made him turn from study to the active apostolate, at first informally, by engaging the young in conversation, encouraging them to turn aside from sin and to accompany him in the service of the sick and on visits to the churches of Rome. In 1548 he founded a confraternity to look after the many pilgrims who visited Rome and later to care for poor convalescents.

St Philip Neri was ordained in 1551 and at first lived in community with a group of secular priests at San Girolamo della Carita. Here he showed extraordinary skill and power as a confessor, and was always to regard the confessional as a means to conversion of life in his penitents, and therefore as the foundation of an incorrupt society in both Church and State. (St Ignatius of Loyola who met and befriended him, held the same view, as did the entire group who had founded the Society of Jesus about 20 years earlier.) At one time, inspired by St. Francis Xavier, Philip thought of becoming a missionary. He was discouraged from this by a Cistercian monk who told him that Rome was to be his mission field, and this probably explains why he is sometimes called ‘the second Apostle of Rome’. 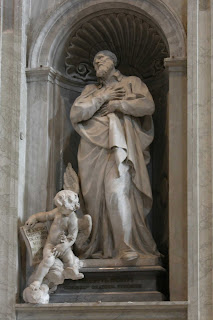 St Philip’s confraternity was the basis of the eventual Congregation of the Oratory, and was so called because Philip and his disciples used an oratory built over the nave of San Girolamo church for public services, which were announced by the ringing of a small bell. At first five priests shared a community life with St. Philip, and were obedient to him as Superior, even though they were not bound to do so by vow, nor was the renunciation of property a condition for membership. The Congregation was approved in 1575, by which time their leader had attracted a huge personal following. He still lived at San Girolamo, where he received cardinals and paupers. He experienced spiritual ecstasy and there are stories that when he was saying Mass, the server sometimes felt free to absent himself for two hours until the saint had regained normal consciousness. In 1593 St Philip resigned as Superior and, through his influence a conflict between France and Rome was averted by the absolution of Henry IV of Navarre who had temporarily embraced Protestantism. On 25 May 1595 St Philip celebrated Mass and heard confessions as usual. He died early on the following morning, in his eightieth year.

Saint Philip Neri is noted for his charitable works, love of his neighbour and evangelical simplicity, but perhaps above all for his extraordinarily attractive personality and for his joy in the service of God. The second Office reading on his feast day is from St. Augustine’s ‘Sermon 171’ and is entitled ‘Rejoice in the Lord always’. St Philip set this example of happiness. And yet we know how much discomfort, if not pain, he must have suffered from the time of his ‘vision’ as a young man. One of his maxims was: “It is easier to guide cheerful persons in the spiritual life than melancholy ones.” One has the feeling that no one could have been melancholy in his presence for long. Perhaps that was his secret.